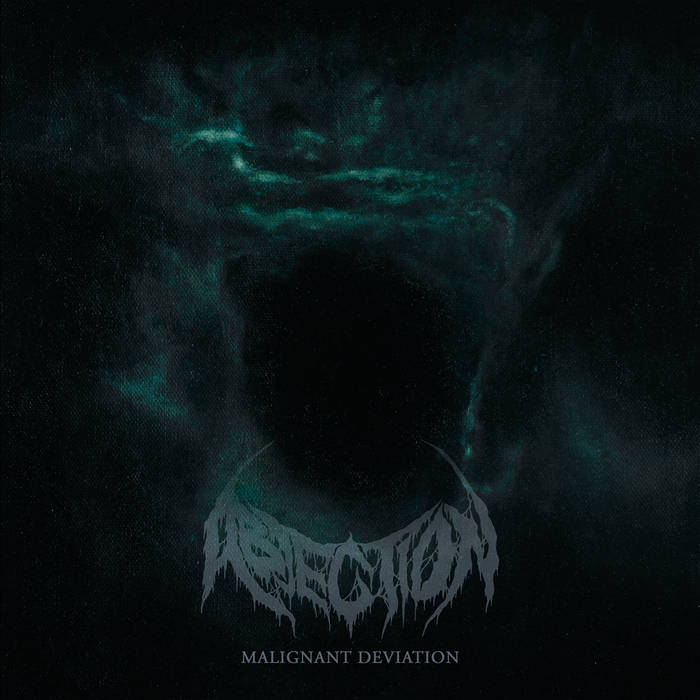 According to the internet, Abjection hail from Canada. Well Hell… me too. So far, so good.

If I’m honest, I’m a bit over short, instrumental intros on albums. I’d rather be immediately and sonically bludgeoned and made to think I did something to deserve it. Opening with album highlight, “An Illusion of Sleep”, would have accomplished that, but instead there’s the minute long, “Of Consuming Decay”. Irrelevant though, because every other track on Abjection’s debut EP, “Malignant Deviation”, is tighter than a bugs ass (but teetering on unhinged) Blackened Death. Guitarist/bassist Sergey described the EP as “a suffocating and lightless journey into the depths of personal psychotic hell.”, (aka a typical day at work for me) perfectly summing up the music and lyrics. The players; Sergey (guitar/bass), Troy (guitar) and Josh (drums) serve up a lethal cocktail of menace, intensity and a dash of dissonance which vocalist Cole uses it to his advantage, offering up some of the best vocals/growls of the year, particularly on the aforementioned “An Illusion of Sleep”.

At a party, Abjection’s sound would give a respectful nod to Portal and Godless, finger guns to Brutal Truth, Massacre and Suffocation, and bro hugs to Incantation and Dearth. The rest of the party would be spent brooding in the kitchen, alone.

At just over 2 minutes, (the shortest tune on the EP) “Nightmares Awoken” wastes little time, opening with a brief shred over pummelling drums and bass. There’s a reckless abandon on this tune more than any other, and despite its ferocity and brevity, Abjection fits in a harmonized breakdown leading to a frantic finish. EP closer, “A Darkness Unutterable” is what the band sound like they’re fighting against… and they’re kicking its ass. It’s an unrelenting 6 minutes featuring a nice old school breakdown midway through, and an eerily melodic guitar solo.

A great debut from a filthy, focussed group. Bring on the full length!