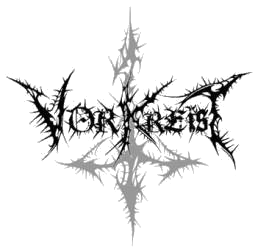 Ah, France. Land of beautiful women, stunning architecture, and, as of the year 1999, savage blackened death metal, coming to us in the form of Vorkreist. With their second LP, ‘Sublimation XXIXA’, the bestial quartet has yet again raised the bar on elegance and brutality. I spoke to them about the past, present, and future of this promising group. (Noah)

Blackest infernal hails and such! How are things going in the Vorkreist camp?
Great, Noah, Hail to thee. The LP version of “Sublimation XXIXA” is finally released through Fire of Fire Records (USA).

Could you, for our readers, give a brief history of the band?
Vorkreist was created in 1999, then it released it’s first album “Sabbathical Flesh Possession” end of 02 after a short self produced demo ” Sermons of Impurity”. In September 03 “Sublimation XXIXA ” is out, both album being released through XTreem Music Records.

Where did you get the name ‘Vorkreist’?
From our perverted imagination : it would be a barbarism meaning “Antichrist”

How has reaction from fans and critics been to ‘Sublimation XXIXA’?
Very encouraging, most of them were very positive, We didn’t really expect from critics due to the number of bands existing but they, and the fans of course, understood our evolutions.

How was the experience making the album?
Much better than for “Sabbathical ”. Seremoth, the sound engineer did a very good work, very professional in my opinion. He is strict but knows his job. Our time and budget were more important but we did what we can. We kept this underground sound prod which qualifies us and make it as simple as it could be, pure Death Black Metal We recorded in his home’s studio, drank and wasted ourselves for good, but the result was what we expected

Where do you draw your influences? On ‘Sublimation’, there seemed to be elements taken from the whole spectrum of black and death metal.
Exactly, AK departed from all his influences, past and present. Scandinavian BM, US Death Metal and Thrash sometimes. The deal was to fit to our general idea of what we really adore and worship. Personify a vision of Hell through all remaining valid influences we all had accumulated throughout our history. Violent emotions, intoxication or ritual experiences, etc.

Lyrically, what subjects do you deal with?
Experiences, fantasies, sometimes objective observations of our scene today, and doubts about its real purposes. And obviously our scorn for what is so cherished by morality’s dogs

Tell us a bit about the cover art of ‘Sublimation’.
Dust, worms, the crown of Christ, the symbol of our societies, the remains of their hypocrisy exposed as a vulgar corpse in its grave. The raising of new “religious forces” which have already doomed themselves. Islam, Christianity, they know that their evil is embedded in their own beliefs, Satan will scatter these ashes, by reason and knowledge and the gift supreme These assholes think they can destroy what they created

What songs on ‘Sublimation’ are you most proud of?
“Great Orders of Sterile Lunacy”, “Void of Grace”, of course, “Sodogma”  it depends on our moods  Pride is something so fragile sometimes  I can’t really tell actually I think, we are proud of our works today, but maybe tomorrow new blood will be shed to feed our creativity.

Could you tell us about the other bands various members of Vorkreist are part of?
LSK and D.Terror works in Hell Militia, unhealthy and sickening splendor of the French scene, LSK is of course still a militant devotee to Antaeus. AK is the genius behind LLB

What does the future hold for Vorkreist? Is a tour planned?
Next January, a tour is planned with 1349 and the Stone. A great opportunity for us, we will play in countries renown for their metal scene. 3 months of metal and freakish encounters  it sounds good to me. Anyway, 4 new tracks are in process of composition, maybe some of them would be played on stage during the tour.

How’s the French metal scene these days? Are there any local or international bands you’d like to recommend to our readers?
Fine, thank you  Well, too many bands, as I said, but I will recommend Hell Militia, Love Lies Bleeding, Merrimack, Goatlord, Inborn Suffering, Arkhon Infaustus of course and Antaeus, not even necessary to mention. Like I always say, I’m proud of our scene, a great evolution has occurred here since the 90’s. I will just add Shemhamphorash and Genozid from Spain, and Infernόs and Corpus Christii from Portugal, great bands, interesting guys

Thanks so much for the time and discussion, on behalf of all of us here at Vampire Magazine. Is there anything else you’d like to say before we part ways?
Thanks for you questions and interest, don’t suck too much blood, believe me, it would make you sick, prefer booze and anything you can snort in. Hail S8tn !!!
I would like to thank Vorkreist for their giving us the time and attention to do this interview. The crew at Vampire Magazine is looking forward to more devastating compositions from Vorkreist in the years to come!