Vacuous – “The beginning of the band feels like a very long time ago even though it was less than 3 years ago, but a lot has happened since then.”

With a superbly melancholy yet crushing new album about to be unleashed, I spoke with Michael of UK Death Metal band Vacuous about relationships with labels, their bleak new album and much more. (Marksson)

Greetings guys. Thanks for taking some time to speak with me. How is everything in the world of Vacuous right now?
We’re doing well, thanks for asking. It’s a fairly busy time for us, both in our personal lives and with the band.

Your brand new/debut album, ‘Dreams of Dysphoria’ is about to drop. What are your feelings towards your new opus on the verge of it being unleashed?
I think we’re all a little relieved to finally be approaching the release date. We recorded it back in October 2021, so we’ve been sitting on it for almost a year, due to current vinyl production times, which has been a little frustrating and altogether maybe more difficult than writing and recording the LP itself. A year on, I think we’re all still really proud of it, it holds up as an accurate reflection of us as a band. I think it shows a nice bit of growth from Katabasis, our previous EP, and feedback on the singles that have been released so far has been very positive. So yeah, fingers crossed it all goes well!

Dysphoria is best described and a great dissatisfaction with life. Does the album represent a personal journey through your own Dysphoria, or does it come via that of a third party telling a story of a general malaise with life and society? Would you say that the album has one main concept?
Jo (vocals) writes the bulk of the lyrics, but we discussed the overall themes and how we wanted it to have a very dark, introspective and emotional side with a very unsettling and harrowing atmosphere The title itself actually came early on in the process and I think set the tone for how the songs ended up sounding. Jo originally had an idea for a more tightly knit narrative concept across the album, but that was eventually scrapped, and it turned into more of a patchwork type thing. It’s not my place to go into detail on each song, but anyway, as you
can probably tell from the music, none of it is positive. 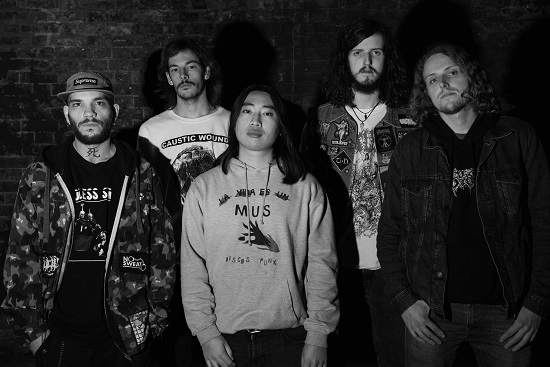 I found the album to have a very intense, bleak sound. How did you manage to maintain the fine balance between crushing Death Metal brutality and the melancholic elements that bled into the albums sound?
Thanks! That’s more or less what we were after. When it comes to the intense bits or the “brutality”, we generally like to push things as far as we physically can, in terms of tempo and performance to where we are almost going off the rails and falling apart. In a way that’s more of a punk, grind or power violence thing, but that’s the kind of energy we find exciting. To contrast that, we wanted to bring in some brooding, emotional and melodic stuff like Paradise Lost, Disembowelment and even Crowbar into the mix. I guess then the more traditional death metal stuff like Incantation and Autopsy is probably the glue that holds everything together. Mixing it all together comes pretty naturally to be honest, as all these bands exist in the same universe for us, so drawing parallels between them isn’t that much of a stretch.

Wayne Adams recorded the album and I think he managed to find that right balance in the. We recorded it in a pretty stripped back way, no triggers or studio trickery but we gave ourselves enough time to play around with some effects and layering to add to the overall atmosphere.

The album art for ‘Dreams’ is very intricately designed. Who designed the artwork, and what instructions were they given? How happy are you with the final piece?
The cover was done by Luke Gilchrist, who is an artist based in Wales. He was originally a supporter of the band and we ended up becoming friends. When we saw his work, we realised he was the guy for the job, as we wanted something abstract, yet intricate, that would be quite emotionally charged. We sent him the music and the lyrics and he had some guidance from Jo about the emotions and the intentions behind the album. After that we left him to his own devices and he did his thing. We trusted him with it but he still exceeded our expectations and I think it perfectly encapsulates the energy of the record. I generally think of Luke as kind of a kindred spirit, someone who “got” us very early on. He is ridiculously talented so it’s an honour that he accepted to do this for us. 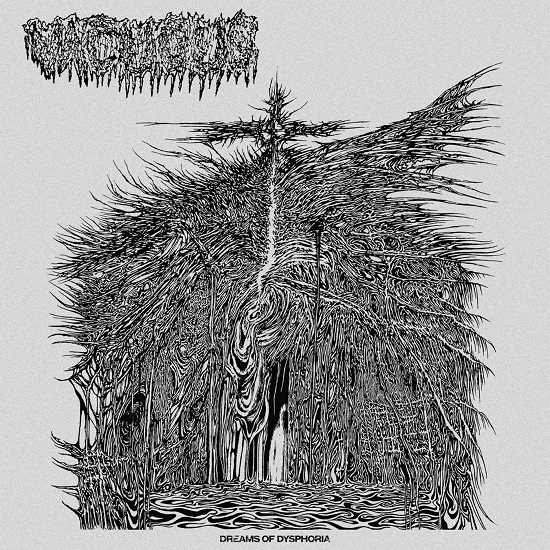 How do you feel that you have progressed and matured as a band from 2020 when you put out a demo and an EP, compared to now with the new album?
The beginning of the band feels like a very long time ago even though it was less than 3 years ago, but a lot has happened since then. The demo we did was more of an exercise for us to find our chemistry as a 3 piece, rather than a release we ever intended to fully stand behind and promote. Katabasis was done in lockdown and to me that’s where we honed our song writing chops. In early 2021, we expanded . I think the rehearsal sessions for “Dreams of Dysphoria”, as well as our first live shows are probably where we really became a “proper” band. The
album feels like the culmination of all that.

Do you have plans to extensively tour the new album? What plans do you have in the pipeline? Any overseas dates?
We do plan to play some shows to promote it. I doubt it will be anything extensive as we all unfortunately have day jobs and other boring commitments which will limit what get to do. There will definitely be a run of UK shows at some point next year and there is scope for some international dates, but I can’t really give anything away now. We are however playing an album release show in London on 8 October at Engine Rooms with Subdued, Casing and Mutagenic Host.

You stuck with F.H.E.D for the cassette release of the album, and also on board are Dark Descent and Me Saco Un Ojo Records. How did your relationships with these labels come about?
Me Saco Un Ojo is one of the labels that Jo and I bonded over when we first met, as they’ve released some modern classics by Undergang, Phrenelith, Krypts, etc…that were all bands we discussed when forming Vacuous. With them being London based, it seemed like a natural first choice when we were looking for a label to work with for the album. We sent Jesus, who runs the label, an introductory email and he liked what he heard enough to invite around to his office and discuss plans. He also passed on our stuff to Dark Descent Records, who he regularly collaborates with, who expressed an interest in doing the CD release.

FHED is one of our oldest allies and supporters, as they released our demo and our EP and I’ve known Jim, who runs the label for years. We wanted to still have them involved in some capacity as there is that element of trust of familiarity with them which is important to us. Luckily, they were happy to handle the cassette side of things, so it all worked out! Overall, it’s an arrangement we’re happy with. Being on MSUO/Dark Descent means has probably exposed us to a wider audience, which is great, but we also get the comfort and familiarity of having FHED’s support.

Do you tend to take much interest in your local Extreme Metal scene? What bands or labels would you like to recommend?

In terms of the local “extreme metal” scene in London, I think Atvm is probably the main band that we all like and we have a good connection with them. Super talented guys. There’s still a lot of brutal/slam/technical death metal stuff going around in London, which we can’t relate to at all. We tend to generally share the stage with punk, hardcore or sludge bands, like Casing, The Annihilated, Stingray, Imposter, Wallowing etc… and I think we probably feel more comfortable at those shows at the end of the day.

Looking at the wider UK, there are definitely a handful of death metal bands that we really like, such as Mortuary Spawn, Slimelord, Vaticinal Rites, Coffin Mulch, Burial Rot, Penny Coffin and a few others. There is a new London band called Gorgon Vomit, who have just released a very promising demo.

How did Vacuous come together as a band? Was there a mission statement from the very beginning or has your sound and lyrics evolved organically through practice and the writing process?’
We officially formed in January 2020, although we had been discussing the project for a few months prior to that. We were originally just a 3 piece with Jo doing drums and vocals, our original bass player Dame and myself. We didn’t form with an explicit stylistic goal, like “let’s play old school death metal in the style of…” but instead we spent some time discussing the types of vibes, atmospheres and emotions we wanted to convey. We knew we wanted something really visceral, raw and harrowing but also quite riff centric and catchy. We come from pretty
different musical backgrounds from one another so there was a lot of time spent in the rehearsal room experimenting with riff styles, different beats. We recorded a demo in March 2020, which mainly just an exercise for to use as a baseline to work on new stuff.

The sound has pretty much evolved organically from there and the more time passes, the more comfortable we are with bringing a wider range of influences into the songwriting . Like I said, we didn’t form with the explicit goal of being a death metal band – that just ended up being the vehicle or the canvas for us to channel our influences, so we’ll see where things take us in the future, but we haven’t reached our “final sound” and we do intend to keep evolving.

Are the members of Vacuous active in any other bands? Now is the time to plug your other stuff!
Yes, we all like to keep busy with various projects. Our drummer Max plays live drums for the band Hellripper and does a fair bit of touring with them. He’s also just recorded a full-length album with another established UK death metal band, but that hasn’t been officially announced yet. Our vocalist Jo has got a new death/grind project called Nerve Centre, which will be releasing stuff in the near future. Our new bassist Zak has released some black/death metal stuff as Hapless Wretch as well as playing in a sludgy band called Snot Otter. Ezra has got a couple projects brewing. He’s also an illustrator and has a semi-regular zine that he runs called “Charred”. As for myself, I have another band called Thundering Hooves, which is in more of a black metal vein, but with a lot of traditional heavy metal influences thrown in (think Dissection, recent Darkthrone). Our second album “Radiance” is actually coming out on October 7 th via Mercenary Press.