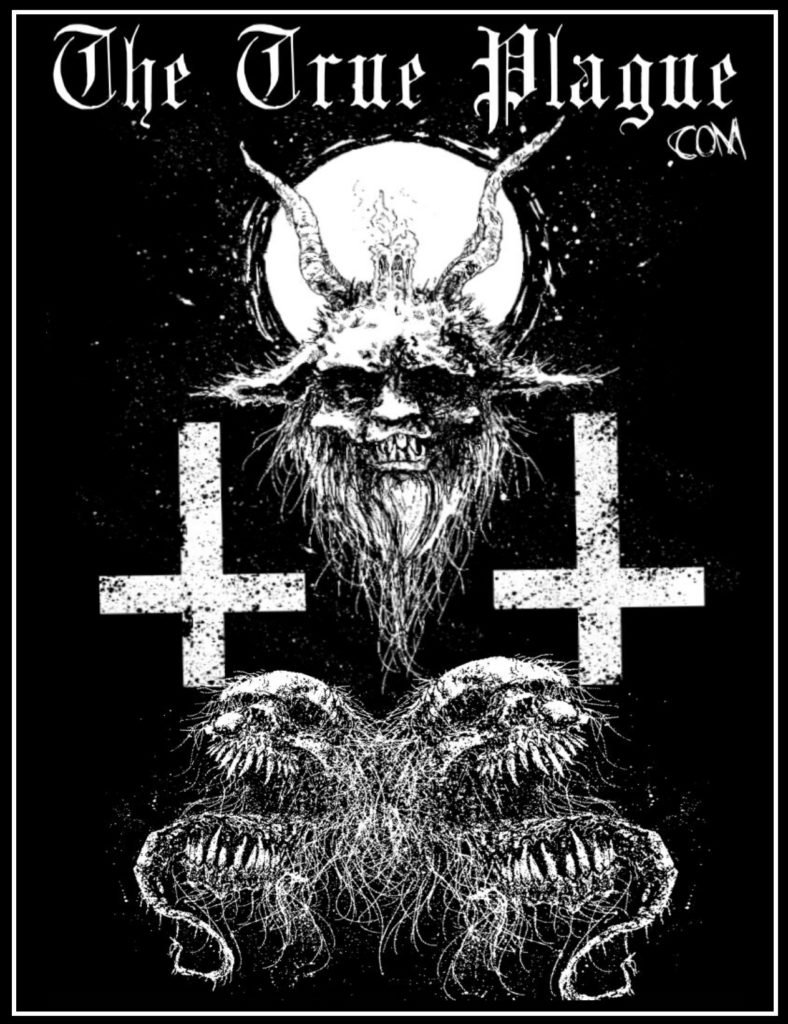 The True Plague is a black metal label based in North Carolina and have been putting out top-shelf releases ever since its inception in the mid ’90s. The following interview was conducted with D Wolf, the founder of the label. (Mongrel)

Hails. Let’s kick things off with a little introduction of yourself and some info about your respected outputs.
Hail! We run THE TRUE PLAGUE from Northern California. Always in support of the Underground. We always try to keep it as pure as possible. Blending all type’s of Metal from different parts of the world. Pure absolute Freedom. Fuck censorship…NO RESTRICTIONS!! NO FUCKIN’ MERCY. 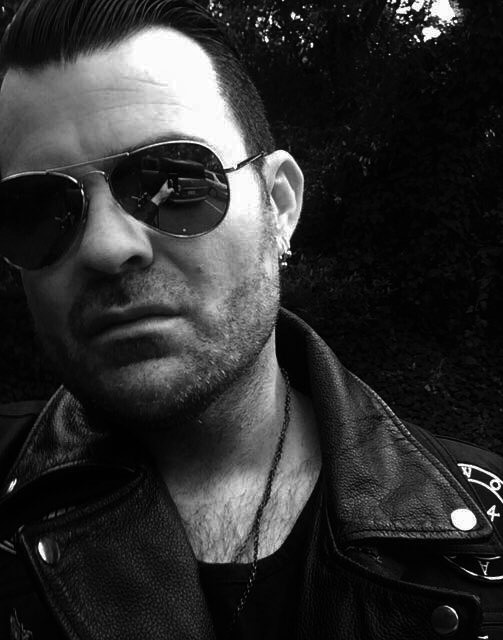 Tell us about your label. How and when was it conceived? What is the ideology behind it?
Long ago (1997-98) I and a few Brothers of mine, wanted to group up all the extreme bands in the southern california area and gather under one banner.. to spread hatred and fear. But being young and without the proper knowledge how to actively keep a group of such like-minded guys together longer than a few months was hard, I figured trying to make a label that we could fly that banner together with would work; again, lack of money and knowledge made that fade away. We had Orosius / Sol Evil / Acid Enema / Kettle Cadaver / Nokturne / Pernicious / Xasthur / Eve Of Battle / Burning Moon & I’m sure a few others all lined up. Between myself (back then known as D.Knyght), Crimson, Orcrist, L.Morder and E.Borsheim, we started “The Plague”. It grew and then faded off with people getting busted with the law, drugs / booze, a lot of unlawful acts and soon it turned into S.C.B.M. (Southern Califoria Black Metal). After a few years, we returned to the night… & faded away. So after many years, much travel, and wanting to do something for the underground once again, I came to my now wife and told her what I had in mind. And with her help and with the words of my Brother Crimson (wise in his ways) I got the distro started back up and for real this time. I added “True” to the name for myself because I’ve always had that name with me growing up in my teens, and I feel that on the second try it would help make it stick around longer than a quick couple of years.

Can you give us some info about all the materials you’ve put out so far?
Ya.. its all fucking PURE HELL.. go check it out! Here’s a list of everything I’ve put out / help put out with other distro’s / labels.. Also before I list this, I want to say Hail to Mike from Black Plague Records ( USA ), He really showed me the ropes early on and helped get me started along with Z from Vanguard Productions who has always done me RIGHT! Hails to My Brother from. the COLD NORTH!! JOHN VON FROST of Von Frost Records ( Canada ).. Also major Hails to Alex from Satanath Records ( Russia ) and to my partner in crime Brison, Owner / operator of Black Metal Records ( Store & Label USA ). All of them I have worked with personally and we wouldn’t be where we’re at today if it wasnt for the help, support and guidance of these true Brothers of the underground. These are in no particular order.. some can still be found and some are sold out or good luck finding..
TTP-666 Ritual Genocide S/T (Cd)
TTP-003 Ritual Genocide – Commencement Towards Annihilation (Cd)
TTP-008 Ritual Genocide / Defecrator – Anti Human Deathcult / Death Exalted (Cd)
TTP-004 Hostium – Pissing Incest On The Virginborn (Cassette)
TTP-001 Curse / Styggelse / Wan (Cd)
TTP-017 Soulrot – From My Grave (Cassette) TTP – Sivad /Funeral Of God – The Black Mass Covenant (Cd)
TTP – Humanitas Error Est -Human Pathomorphism (Cd)
TTP – The Projectionist – Poisonous Disengagement (Cd)
TTP – The Projectionist – The Gallowforest Eulogy (Cd)
TTP – The Projectionist – Exalted Solitude (Cd)
TTP-Hell Pernicious S/T (Cassette)
TTP/Goat Okultus Ritual – Spirit Death (Cd)
TTP/Virus Larvae – The Intelligent Machine (Cd)
TTP/War Totalitarian – Pathei Mathos (Cd)
TTP/Wolf Elegiac – Obsidian Moon (Cd)
TTP/Hate Pernicious S/T (S.C.B.M. Cd) 1st & 2nd Pressing
TTP-S.T.O.R.K. Sol Evil – Master Of Ascendancy (Cd)
TTP-Claw Aornos – The Great Scorn (Cd)
TTP-Fang Grimorium Verum – Revenant (Cd) 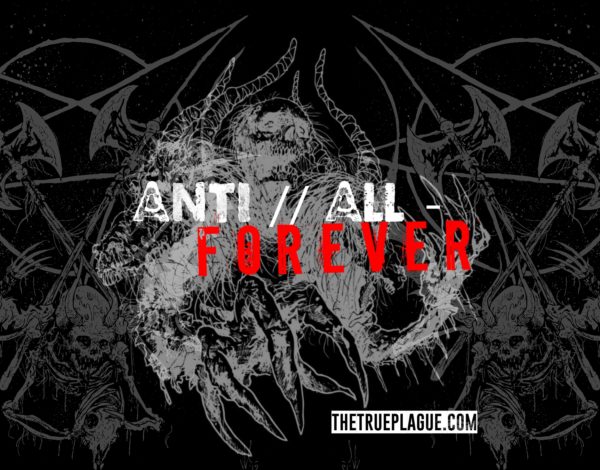 What is your opinion on the current state of the underground?  Are there any bands/labels worth supporting?
My Wife and I don’t get out to shows as much as we want, but when we do it seems good and healthy. Young bands that are really taking it to new levels (some of them). I think a lot of people judge whats actually happening on shit sites like facespace and whatever.. I hate that site.. but unfortunately It does keep me plugged in to people I enjoy meeting (Bands & Labels / distros) both good and shitty. FUCK IT ALL! HA

Can you tell us about all the bands you’ve played in and recordings that involved your input? Which releases are you most proud of?
Yes! lets see.. Orosius / Burning Moon / Sol Evil / Eve Of Battle / Kettle Cadaver / Pernicious / A.R.C. / and my most recent are M&D ( 2 man project with my Brother Crimson ) & my solo projects – Anthems Of Ancients & END.//div I think thats all.. I could be missing something.. regardless, I’m proud of them all, all for different reasons.. some serious and some just for the sake to play.

I understand you were in the military. What did your service amount to and for how long? Has it influenced your outlook on life in any sense?
I was in the Merchant Marine for 5 years.. its not the military but you have to go thru coast guard / boot camp / training, etc etc.. its a long process.. but in the end your basically a “legalized Pirate”. I worked in the Deck Dept. I love the sea, I’ve sailed every ocean on this rock, I’ve seen sunsets and sunrises from the endless sea’s all around the world. been to 3rd world countries as well as 1st world hell holes. I worked for Military Sealift Command, on A bomb carrier.. a ship..and its cargo.. bombs.. only bombs.. all types of bombs.. it was like being in VONDUR’s wet dream.. destruction boat city. I was salty as fuck too when I was a sailor.. i still drank back then, and everytime I took a step a handful of Mortons salt would fall out my starboard pant leg. And yes it did shape the way I look upon life and this world…but it’s wasnt a definate for me.. I view life day by day.. one day at time. Ever changing and with the mind’s artwork.. terrible and wonderful views and realities I have.

Do you think it’s common for people in extreme metal to go join the military?
Don’t know.. to each their own.. but I fully support any and all who have served.. weather they enjoyed it or not is none of my business.. but service is a selfless act upon most should consider.

What are the pros and cons of running a small label? And what would your advice be to anyone looking to do the same?
Pros.. it’s all about the underground.. I always want to be the guy that I wished I met while on tour, helpful and honest and wanting to actually get your music out there.. Cons.. Not really anything.. i guess once in awhile you have to deal with a nugget that is annoying or difficult to deal with.. but shit like that doesnt really bother me these days.. people are who they are, and if that’s how they want to be.. fine. I can also say, its a con.. BUT! it has to be expected.. you’ll end up spending a lot of your hard earned money doing this, I don’t technally make any money doing this.. i useally lose money in the long run.. but fuck it.. FULL SUPPORT!! Anyone looking to do the same… dont, just buy from those of us that are already doing it.. hahah

What is your stance on mainstream labels nowadays jumping the black and death metal bandwaggons, especially when they’ve been dabbling in alternative metal and other puke-inducing trends for over a decade?
fuck em’

Do you think there’s maybe a misconception that most people in metal bands are on drugs?
Well who know’s really.. none of my business to be honest.. and again to each their own. I believe theirs a lot more addicts that play / listen to other types of music ( if you can call it that ) than just metal. I have no problem with people and their addictions.. I can relate.. from my past.

10 albums you can’t live without.
MysticuM – in the streams of inferno.. and anything VONDUR .. and that’s it.

What are some killer black/death/thrash bands coming from the US right now? Also, are there any bands from other parts of the world that have caught your attention lately?
fuckkk.. so many.. top of my head.. ELEGIAC / DIABLOUS AMATOR / INDESIDERIUM / MASTURBATORY DYSFUNCTION / ACID ENEMA / DEFECRATOR / SARTORAAUS / THE PROJECTIONIST / RAW DOGS / THE BLACK SORCERY/ FVNERAL FVKK / BYYRTH / XUUN / SIVAD / FUNERAL OF GOD / SICARIUS / RITUAL / TIDELESS / UTU / ENTROPI / DEEPSEAORGANISM / etc etc… so fucking many haha 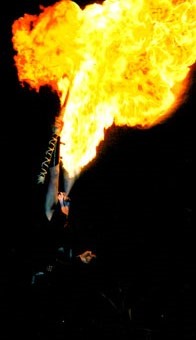 Do you have any memorable experiences to share with us regarding any of the bands you’ve played in?
I blow fire.. I was told that in order to blow fire you must first speak words so evil that god MUST ignite them as they leave your mouth so that his sheep’s ears wont be defiled. So I did that a lot while playing live and on tour.. other than that.. a lot of blood / piss / vandalism / laughter / sorrow / all that good shit when your young dumb and full of…

If I’m not mistaken, you’ve also toured a couple of times? Also, which bands have you shared the stage with?
Toured with Sol Evil back in 2001, along with the Mighty BLOOD STORM!! AND ENTHRONED ! Also toured with Kettle Cadaver on the west coast and it was Pure amazing HELL!

What’s the future plans for The True Plague including your other activities? Which of your releases are currently available?
D WOLF – We have a few remaining releases to do with my Brother from BMR ( Black Metal Records ) here soon, i say a few, but knowing me its hard to say no, and so I’m sure a lot more HELL will be coming down the pipeline soon.. Be on the look out for FEVER.. ( their fucking insanely badass ) as well as BLITZGEIST ( Zane from Elegiac.. he’s a madman and a true brother ) Along with the long awaited.. OKULTUS RITUAL!! ( i promise its coming Andy! )

Thanks for answering these questions! Best of luck to you and your endeavours.
Hey.. Thank you for taking the time to hit me up Brother. Hail!! AAF!-23