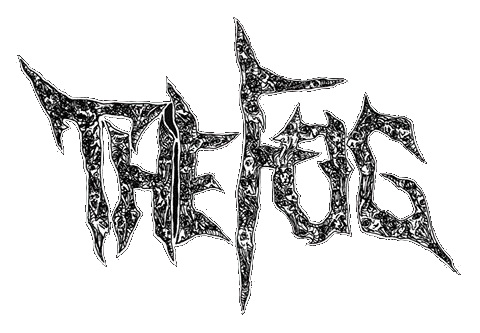 Are you interested in a band that created THE most old school Doom/Death album since long? Fan of the ugly, raw, disturbing and primitive edge of doom/death metal? Well, search no longer, cause album ‘Perpetual Blackness’ from German based band The Fog is all you need! I’ve mailed bass player C.C. Defiler to unlock some extra info and details about the band and its creation that led me to the depths of doom. Enjoy! (Fredde)

Hello guys, everything fine in Germany?
Cheers Fredde, nothing is fine if you have to answer questions in a language you can barely speak in combination with a huge hangover, which now lasts for the third day, but thank you anyway!

Your first full-length album has been released…but I suppose many people haven’t heard about the band yet. Can you give us a introduction of how the band was formed, the different band members and their skills, … ?
The Fog is active since spring 2014 and consists of V.Lord (Vocals/Guitars), Avenger (Drums), and me, C.C. Defiler (Bass). V. Lord had the idea to play this slow kind of Death Metal since he left his former band Beyond where he played bass. He met with Avenger in the rehearsal room and after two rehearsals I joined the band. Shortly afterwards we recorded our Demo “Void Nexus” and things started to take its course. 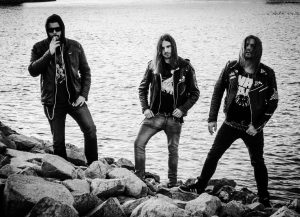 The label this release is signed on doesn’t really exists that long (since 2010)…satisfied with this young label? How did you get in contact or was it the other way around?
Raul of Memento Mori contacted us shortly after we released the first song of our demo and after listening to the complete tape, he told us he would like to release a future album of The Fog. After a short break we began to write some new songs without any considerations of releasing another demo or a mlp or something else. But the offer was there and we were pretty convinced by the new songs so we decided to record a full album. Memento Mori did also stuff like the Delirium Re-Release and so we thought it would fit to the music we are doing.

Perpetual Blackness has been released in January 2016, so now it’s available since few months…how do you look at the album now? What’s your own evaluation about it? Things you would do in another way, aspects where you’re proud of?
I think it’s unnecessary to think about things we could do another way because you can’t change them anymore. Besides that we are pretty satisfied with Perpetual Blackness and the way it sounds. Everything sounds the way we wanted and there is no need to change anything.

Well, about the music…I listened to the album that has a duration of about 50 minutes, and in that small hour you were able to give me the feeling how doom/death metal should sound like (thanks for that!)…were you guys always obsessed by the mix of doom and death metal or did it all started with another genre? And what fascinates you about this style of metal? And I’m curious why you’ve chose the old school style of doom/death and not the more ‘modern’ version of these days hehe
I’ve always been impressed by bands like Winter, Autopsy, Goatlord, (very old )Asphyx and their approach to play this ugly and rotten kind of music. When we started we wanted to play music in that way. Simple, raw, ugly, disturbing and primitive. Like a drunk guy who beats you straight into your face, haha! Sure there are some exciting modern death/doom bands but it’s not the kind of music we want to play.

How would you describe the lyrical concept of The Fog?
‘Perpetual Blackness’ features several lyrical themes, including the senselessness of all being, visions of dystopia, cosmic chaos and mental disease. In a way, a lot of the lyrics lead back to the senselessness of existence, as everything dealing with endings in one way or another implies the former. That’s pretty much it.

Is there a track of the new record that you’re especially excited about?
I only can speak for myself, but “Grievous Scourge” is the song I’m mostly excited about. It’s the perfect song to close this album and Avenger did a great job doing the synths in the second half of the song. But it’s hard to choose one single track. I’m excited by “Perpetual Blackness” in its entirety.

Who has produced and mastered the album? Did he already scored credits while working with other bands or is he someone new in the scene? Could you give us some information about the studio it’s been created, the working process, …?
“Perpetual Blackness” was recorded by Avenger under the influence of cheap schnapps in our rehearsal room with nearly the same equipment we already used to record our demo tape “Void Nexus”. Laurent Teubl from Chapel Of Disease was responsible for the mixing. He’s a friend of us and he knows how this kind of music has to sound. Ted Tringo from The Ancient Way Mastering mastered the album. He has been recommended by Raul from Memento Mori and all three have done a really great job!

The sound on Perpetual Blackness sounds vile, the vocals sound rotten and deep and yes, even the album cover isn’t one of the sunny side (what else can you expect with this style of music )…who’s responsible for the artwork?
Misanthropic Art was responsible for the artwork. He’s done some great artworks in the past for bands like Chapel Of Disease, Nyktalgia, Alchemyst or Deathronation and we are really satisfied with the work he has done for us.

What are the plans in terms of touring/shows? Any change you will visit the neighborhood like Belgium and Holland?
We are playing a few shows in the next months in Germany. Until now we haven’t been asked to play in Belgium or Holland. But why not? I absolutely adore Belgian beer and Dutch weed so this would be a no brainer, hehe…

I’ve noticed the album is also available via the digital way (like Itunes)…not that common that an underground band provides their music through those channels. Are you fan of the digital world of music or do you pledge the old school way like vinyl and/or tapes (a media format that has some kind of revival)? And off course, will this album be released as vinyl/tape?
Iron Bonehead recently released the vinyl version of “Perpetual Blackness”. A tape release is not planned until now but if someone wants to release the cassette version he should contact us. I’m not really interested in this Itunes stuff but our drummer had the idea to release “Perpetual Blackness” on platforms like this so we did it…

How are the reactions to the album so far?
Actually I don’t really care about the reactions. We are really satisfied about the record and how everything worked out which is much more important for me.

Any bands in particular that comes back in the sound of Perpetual Blackness?
The band which comes back most significantly in our sound is ourselves. Of course, you’ll hear some strong influences by the bands mentioned above (and others). But we do not try to copy any other band’s style, we rather prepare our own nasty mixture by blending our musical background with ideas of our own.

A question I frequently ask…if you could persuade people to buy your debut album…how would you promote it? Why should people buy or at least check out this release?
Buy “Perpetual Blackness”. Otherwise we’ll find you and beat the shit out of you!

Well, I’m out of question for now…any last words for our readers?
Thanks for interviewing us & stay metal!