Svartkonst from Sweden received quite some praise from our own DPF, when he reviewed the latest release “Black Waves”. An epic Black/Death journey or as he described it: “The songs flow, they move onwards to destroy and infiltrate deep within one’s soul. Sometimes fast, sometimes slow but no less effective…”. Reasons enough to ask Rickard Törnqvist if he was willing to tell us all about Svartkonst… (Ricardo)

Well, let’s start with the mother of all questions…Could you tell us more how things started?
I live in a small town, with no noticeable music scene for extreme metal, so I decided to take action myself and started Svartkonst in 2012. It became a way to express myself and evolve in many musical ways. Both in songwriting and in production.

I have always listened to a variety of artists and bands, and influences change all the time. I think you can hear that in “Devil’s Blood”, it’s a mix of many nuances and styles. But my main styles have always been old school Swedish Death like Entombed, and Black Metal like Darkthrone and Watain. Those were the first bands to inspire, and still do.

Before we talk about your latest release, let’s go back to your debut full-length “Devil’s Blood” (CD & 12″ vinyl released by Trust No One Recordings)…
I have a special place in my heart since it is my first release. And it is very personal to me, I did this album just for myself and never thought much of it. It took a long time to finalize since I recorded everything myself, mixed and mastered it. It took some time to learn all these skills to a point where I would be satisfied enough to release it. I could never have dreamed of it being released on vinyl, and the great reception it got in the extreme underground scene. I’m very grateful for that.

Why have you decided to record a debut full-length right away, without releasing a demo or EP first? Just opportunity or is there another reason?
Since I was recording everything myself a demo seemed unnecessary. I was always trying to perfect and re-record my songs to achieve that sound that I wanted. So I guess I did many demo recordings myself before I found the sound I wanted. 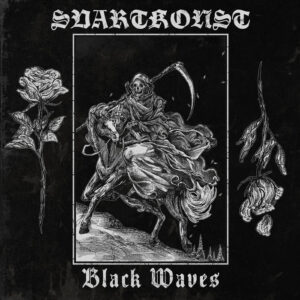 And now your latest album “Black Waves” (CD & 12″ vinyl released by Trust No One Recordings). Can you tell us more about the writing process for example?
The writing process started shortly after I had released “Devil’s Blood”. Since that album took quite some time for me to release, I had many new ideas when it finally was released. I had a creative outburst that resulted in “Black Waves”, and the time after was just perfecting the songs and finding the right sound for this new project. I am very happy with the results, and I think that shows in the overwhelmingly positive reviews I have gotten.

I think that “Black Waves” is a little more refined than “Devil’s Blood”. It’s heavier, more focused, and atmospheric. “Devil’s Blood” was rawer in a sense.

What are the lyrics about? Are the lyrics an important aspect of the band or are they just there to guide the music?
Lyrics are very important, and they’re the most difficult to get right. The lyrics are a little mix of everything, but it boils down to the emotions around life and death, how people see, feel and experience death in many ways.

How did you get in contact with your label Trust No One Recordings? Did they contact you? Will they release your new material as well?
TNOR contacted me after I had released “Devil’s Blood” digitally and wanted to release it on vinyl asap. We have had a great relationship since then and we will surely continue to work together in the future.

What are your expectations for Svartkonst in the future?
Hopefully there will be some live shows in the future. But seeing as the situation is now that seems pretty far off. This covid situation has not fueled my creative process with everything being cancelled and isolated. I have spent more time rehearsing with my live setup. But I have begun to write some new songs, but it’s a slow process. I can’t tell much about it as for now. 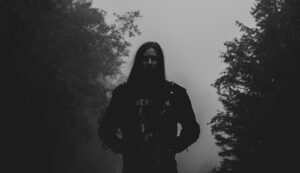 Are there any bands or albums of your recent playlist you would like to mention? A rediscovery, an overlooked gem or an unsigned demo band that deserves attention? Any other bands of your region of Sweden that are worth mentioning and to check out for our readers?
I have listened quite a lot to the new Spirit Possession album. I have also been enjoying Andavald’s latest release “Undir skyggðarhaldi”. And a gem I recently got recommended was “Genocidal Journey” by Messiah in the Abyss.

A band from my town, and very close friends, are Ulfven who released their EP this year, “Bland Aska och Sten”. I strongly recommend it, really cool riffs and songs.

Are you involved in any other way in the music scene?
As I have mentioned I have recorded both my albums myself. I have a small home studio I’m working on (Svartkonst Studios), and my goal is to start working with more bands. I have produced my friends at Ulfven’s albums. And I’ve recently mixed/mastered a band called Vånda’s latest album, hopefully to be released soon.

Also do you have favourite labels you always keep an eye on when they announce a new release? Or a favourite illustrator / cover artist? Any favourite printed / online zines? A distro you order a lot from?
I have to give a shoutout to the artist that did the illustrations for Black Waves, Yasinviolet. Super talented guy. Otherwise here in Sweden there is a great fanzine called Urkraft I really enjoy.

Before we wrap up this interview, do you have any final words or thoughts? Is there something I’ve forgotten to ask you which you would like to mention? Thanks for your time!
Thank you for having me and for a great interview.