Siderean’s debut album “Lost On Void’s Horizon” definitely is one of the death metal highlights in 2021 as far as I’m concerned. Knowing these guys are not exactly new but probably not that well-known yet it’s only logical to ask this band some questions. (Pim Blankenstein)

Hi guys, before we get to talk a bit about your new album “Lost On Void’s Horizon” we should delve a bit into your past. You started out as Teleport in 2010 and you recorded some demos under that name. The last one “The Expansion” was released in 2018. Was this the demo that got you your deal with Edged Circle Productions?
They also re-released that demo on CD right?
Yes, that’s true. “The Expansion” demo was the final culmination of Teleport before we got signed to Edged Circle Productions. Prior to sealing the deal though, it was actually released through Caligari Records on a cassette tape. It was later re-released on a CD through the new label.

In 2020 you changed your name from Teleport in Siderean. I think this had something to do with the threat of a lawsuit by a former member? Can you tell us what happened there?
A former member left the band, and then changed his mind much later. When a return wasn’t an option, he felt that the band, the name and other trademarks should somehow be split in half, a viewpoint that we did not share with him. So he resorted to lawyers. We figured that dragging the matter through court during a debut album release was neither a good omen nor very practical, so we just renamed and went from there.

For those who are not aware what Siderean means, can you explain the name? It’s also a quite “logical” change considering the previous name Teleport and perhaps your lyrical content?
It was a logical step up for us, considering all the events that influenced the situation. First it was a real struggle to endeavour, but looking back now it seems kinda obvious that this kind of evolution was mandatory. With the name change we have stepped up our game – conceptually and musically.

Siderean means “of the distant stars”, which fits very well with what we’re trying to achieve musically. The new name also helped guide us farther conceptually, with grand themes of humanity and the cosmos at the forefront, and the mystery of what lies beyond deep space and human perception always lurking in the mix. It’s definitely an evolution, as the name of the first demo release also hints at. We’re always looking to expand our sound towards new horizons.

Before the full-length Edged Circle Productions also released a two song cassette entitled “Sidereal Evolution”. Was this a release to show the new name and line-up or was there another reason to do this release?
Stian and Christian from ECP really supported us through the name change process, and more importantly, offered us the exact same recording deal as was previously agreed to with Teleport. But they thought – and we agreed – that investing so much in a debut album, dropping out of nowhere by a completely new and unknown band, was too much of a risk, so the demo tape served as one of the means of promotion of our music before the release of the actual album. Luckily we had already recorded a pre-production demo of the album, which was good enough for the demo release and we have picked two songs and put them out. 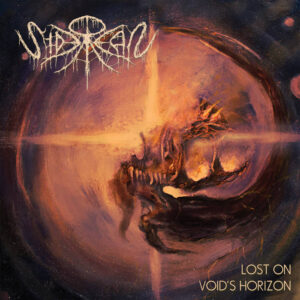 “Lost On Void’s Horizon” is your debut full-length and I must admit that it is a great album. It blew me away when I first heard it. Knowing you’ve been around as a band for quite some time already what inspired you to come up with your style and sound? I mean what other bands or perhaps movies or books?
Thank you! We are always happy and grateful to hear such responses! Speaking of musical influences, well there were many bands we have looked up to. Obvious ones that took a role in our recent sound development were Gorguts, Stargazer, Morbus Chron, Execration, Virus/Ved Buens Ende, Krallice, Blood Incantation, Morbid Angel…  just to name a few. But our influences are quite broad, going from funeral doom and war metal bands to many jazz artists like Mary Halvorson, Yussef Dayes and krautrock acts like Popol Vuh and Tangerine Dream and such. Vangelis is always a great source of inspiration too. We could go on and on with these.

I do feel there are some similarities with contemporary bands such as Morbus Chron, Execration of Horrendous to name a few. Do you see any of them as an influence or inspiration? Your album was mastered by Damien of Horrendous and I guess that was an obvious choice for you guys to work with him?
Morbus Chron and Execration were both huge influences on our music. Let’s take albums like “Sweven” and “Morbid Dimensions” for example, pure perfection in the sense of song writing and atmosphere. Can’t get better than this. Horrendous is another band we have looked up to in the past, a great sense of melody and sound production. “Ecdysis” was an amazing example of how contemporary death metal with a melodic touch can still be fresh after decades of the genre’s birth. The collaboration with Damian was interesting, he approached us when we were still under the Teleport moniker and of course it was an honour for us, since we’re fans of most of his works. As a mastering engineer, he was a no brainer choice.

Can you tell a bit more about the recording of your album? I assume this was done locally?
Yes, Darian recorded the drums in a professional studio in Ljubljana, Metro Studio. The rest was recorded at our homes, and the re-amping was done at our rehearsal place in Ljubljana. Anže Čanžek played the main role in literally every step we did while recording; he engineered the sound, helped us while recording and edited everything and mixed the album. We have worked with him many times now and we feel sometimes he is a part of the band as well.

How is the scene anyway in Ljubljana and/or Slovenia? Do you have any affiliation with other bands from your country?
The scene is evolving, slowly but surely. Right now there is a death metal trend going on in the underground like the rest of the world. After the first wave of epidemic, a few new death metal bands popped up, such as Nefarious Vermin, Ensanguinate and Razvalina. There are other great bands out there, such as Ater Era, Vigilance, Mist, Hellsword and Challenger to name a few. Also watch out for Kamra. 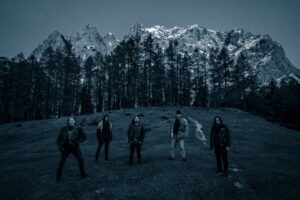 Talking about affiliations with other bands. It seems your guitarist Matija also plays live with Italy’s Assumption and your drummer Darian is involved in the Chinese band Mefitis? What can you tell about that?
Matija has been a full member of Assumption for sometime now, and in 2022 they’ll release a new album. He got to meet the guys in 2017 while performing as a session guitar player for Escarnium, and joined the band a few months later.

Mefitis was a project Darian joined while studying for one year in Beijing, China. He asked around in a Metal CD shop and got in contact with an American guitarist who was collaborating with a local female singer. The three of them started practicing and finishing the songs that were basically all written beforehand by the guitarist. In that year they managed to record the EP “Despair” and also had a great gig in Beijing. He had eventually finished his studies and left China, so they couldn’t continue working together, but they do keep in touch every now and then.

Jan has his solo project called Noč, experimental on many levels. David also plays in a few other more jazz, fusion and ethno influenced bands, Divota and BorZak to name two, both on a high technical level.

You are very much as live band too. Now that the world is opening up again step by step, have you got any plans to do any touring in support of the release of your album?
We’ve had some local gigs in a few Slovene towns recently and the response was always great, and we couldn’t be happier with that. We would love to play more live gigs and we’re currently in talks for some possible international tours, hopefully these will happen. The Covid situation here isn’t good right now, so some already announced gigs are likely to get cancelled, but we are still looking to the future optimistically.

That’s all from my side. Anything else you might want to add?
Thanks for the opportunity to talk to you, hope we can meet at a gig someday! We would also like to say that we are intensely working on our sophomore album material, and that we will soon have more things to show in the near future. Stay tuned!