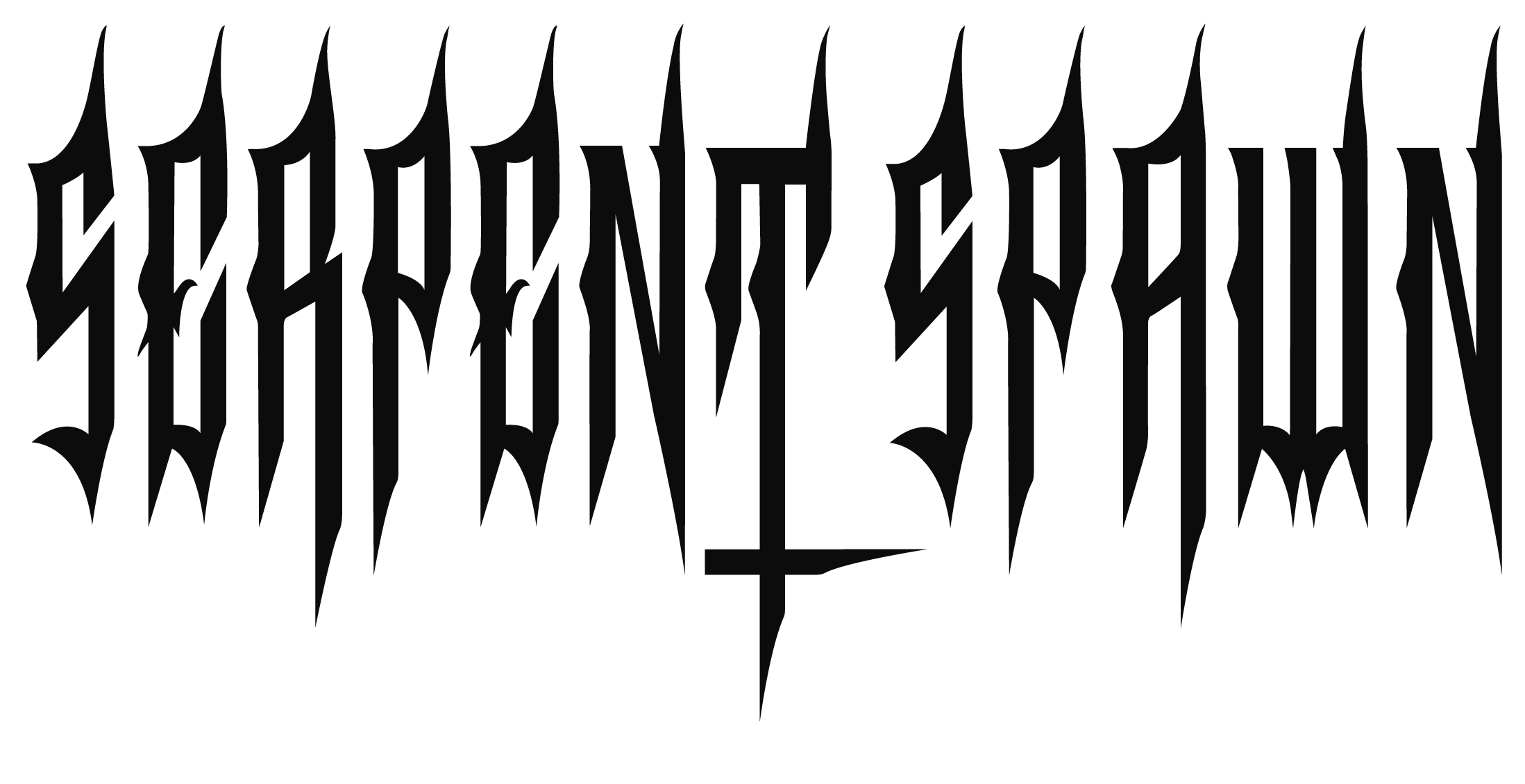 After a couple of seconds it was crystal clear; Serpent Spawn from Germany plays their Death Metal the American way. And without any doubt they did a good job with their debut EP “Crypt of Torment”, which is worth checking out for every enthusiast of early Deicide, Monstrosity, Sinister and Malevolent Creation. Martin Witchskinner (vocals, guitar & bass) answered a couple of questions… (Ricardo)

Hell-O Ricardo. Here’s Martin answering your questions. Ok, I ´ll try to get to the point here.  We all know each other from the early 90s and were involved in the underground scene back  then. me and Rob played in Blood for a while, then we started Dawn together. Just on a  side note, the Dutch tapelabel Into It Records will release our Dawn Debut Demo “The darkness within” from 1993 this summer in a limited edition. Markus played in Malaphar and in  Naked Whipper. Obviously, as it was back then, we met at gigs and got to know each  other.

In 2019 Markus and I had the idea of jamming together. I was eager to play guitars again and  be more creative than I could be in Blood. After a couple of rehearsals I asked Rob to  join.Thats was the birth of the Spawn. We generally love Metal and I guess we have some  bands and albums we equally love, like Suffocations´s first albums, Morbid  Angel…personally I love Death Metal, I´m not that much into other genres, though there are other  good bands around.

Before we start on your own music, in your opinion which historical release or releases absolutely defines the genre you’re playing? Is it Deicide’s ‘Legion’ or Monstrosity’s ‘Imperial Doom or maybe an Immolation demo, Malevolent Creation’s debut?
I just can say that Deicide’s “Legion” and Malevolent Creation’s “Ten Commandments” are some of the best Death metal ever recorded. They set the benchmark for bands to come.

Onwards to your EP “Crypt of Torment” (CD, cassette & 12″ Vinyl released by Iron Bonehead Productions)…
We recorded “Crypt of Torment” in September 2021 at the Kohlekeller Studio. It was the first time we three went to a studio together. We had to figure out a couple of things, recording those days may be easier at some points but also requires a couple other skills. We´re pretty satisfied with the result. Chris Moyen did the artwork for us, as he´s an old friend and his artwork is some of the best I can imagine. As we´re pretty old school, I asked him if he could do a “Melissa” styled skull with lots of serpents..That worked out pretty well.  So far the reactions are good, we´ll see how the debut is selling after it’s out on the 24th June 2022.

I´m writing all the lyrics and they are about the fuckin´darkness, Satan and all things wicked and metal. I´ll try to match the lyrics with the titel and from there I will go on. I think they´re important to the point where they fit to the vocals and deliver an evil apocalyptic message. Though there are not any deeper messages we´re transporting here, just darkness, death and absolute destruction.

Within your discography you have both cassette and vinyl as formats as well. Is that important to you? What do both formats mean to you, as a recording artist but also as a collector? And how did you get in contact with your label Iron Bonehead Productions?
We recorded “Crypt of Torment” before we had any deal with a label. So , it was a gamble, if no label were interested in a release, we would have released it as demotape (..so to say, or Demo CD). In know that it´s nearly impossible to get the name out as a small underground band without any reputation, so when the recordings were done, IBP heard them and were interested in a release. Markus (drummer) was in touch with IBP, because IBP released a Discography LP/CD of his previous band Malaphar. It was our idea to release it in full-format. We’re not a digital band, I guess our music is meant to stay on various media and we love to have the stuff ourselves on the shelves, haha.

Will Iron Bonehead Productions release your new material as well?
Well, let´s wait what happens after “Crypt of Torment” is out. We definitely are working on a full album.

What are your expectations for Serpent Spawn in the future?
We finally found a bass player, so right now we´re practicing the songs with him. I guess  we’ll try to play a couple of shows next to promote the EP. We already have enough songs for  a full album, since they were written in the same period as the songs on “Crypt of Torment”, they are right in  the same direction. You know, we took a song that was early written, two from like a year of  playing together and a pretty new one. So the Ep sums it up.

You are also involved with Blood. Any news to tell our readers about it?
Yes, I´m singing for BLOOD and we have released right now a split EP with  NUNSLAUGHTER on Hells Headbangers and VIC records (Netherlands :-), you surely  know it ).

It’s also a full format release, CD, tape and vinyl coming in the next few months.  We have some brand new news, there is the release of a 7″ Discography on a 2 CD Digipack  Release, with a lot of gimmicks, like patch, poster, postcards. It will feature all Vinyl releases  plus two analog live releases from BLOOD. It’s really nicely done, so stay tuned. 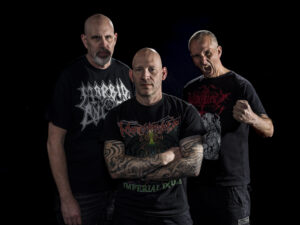 Are there any bands or albums of your recent playlist you would like to mention? Any other bands of your region of Germany that are worth mentioning and to check out for our readers?
I mostly check out bands from friends or when they tell me about a band and what I can really recommend are the following records. Not only i know those guys, but i think they did a really good job, so here we go:
CADAVERIC INCUBATOR – NIGHTMARE NECROPOLIS, very old school deathgrind from Finland, with a very barbaric production, they take no prisoners.
TRENCHANT (US) – Comandocult, this is some amazing brutal deathmetal with a touch of BM, very good songs, very serious sounding band, they rip.
HORDE CASKET (US) – Plague supremacy (2022), they do technical DM at lightning speed, very brutal stuff if you’re into brutal US Death Metal

I feel a little bad, I don´t know much about the local scene or the german scene at all, but I´d like to recommend the Dutch masters in Bile / Skullhog..I have a hang for Dutch Death Metal.

Also do you have favourite labels you always keep an eye on when they announce a new release? Or a favourite illustrator / cover artist? Any favourite printed / online zines?
That’s a bit complicated, of course I check some label sites, but somehow not everything a label is releasing is of interest to me. There are illustrators i follow like Chris Moyen (Thorncross), Karl Dahmer, there’s a Russian artist, I forgot the name and unfortunately because of the current events he is no longer active in the social media, he did outstanding work for some Blackmetal bands. In general, I like every form of creativity, be it doing a podcast, a blog, a fanzine, organizing gigs, it keeps the whole underground alive – even the underground is so huge these days..it’s impossible to keep up with all the information. So thanks to you Ricardo for doing this and I mean it!
Thanks for your kind words, we’re just doing the best we can.

Before we wrap up this interview, do you have any final words or thoughts? Is there something I’ve forgotten to ask you which you would like to mention? Thanks for your time!
We will have shirts with the “Crypt of Torment” Design by the way your mag is out, if  someone out there is interested in booking a fast and blasting deathmetal band, check us out. Oh well, I love the Netherlands, I´ll spend my holidays there at the beach, with VM Underground there´s another reason to love de Nederlande! Cheers! Hail Satan!