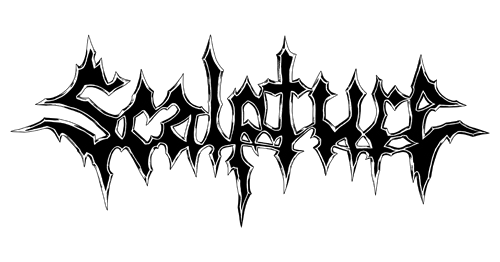 “A waste of young…And unlived lives…Only becomes a sacrifice…If no one survives”. Just an excerpt from “Und Ehre ist’s”, a song about Die Eiserne Jugend, a kind of soldier identity, young and youthful soldiers torn away from their families to fight for a proposed ideal while reality shows that their future was already certain for them; to die in the trenches during World War I, The Great War. Both wars have their own intrigues, strategies, visions, manipulations, morbidities, sacrifices and dozens of stories…enough inspiration to fill tons of discographies with it. Scalpture have chosen the first one as lyrical subject for their latest album “Eisenzeit” and their Death Metal, well…like a marching division towards the battleground. Felix (guitars) and Thorsten (vocals) will tell you all about it…(Ricardo)

Felix: At the end of 2009 Thorsten and I founded the band as the product of a boozy night. Everyone involved in this band comes from our personal surroundings. In the early days some were on the same school and others we just knew from the local scene. Since we all had a similar taste in music, it made sense to start something together. Death Metal pretty much was the only option for us since we were and are big fans of Bolt Thrower, Hail of Bullets, Dismember, Asphyx and all that good stuff. The sound and themes we aim for is obviously influenced by those bands. As everyone else you start a band to play shows, meet people and have a good time. I guess this was our motivation aswell.

When you look back to your first demo “Born into Battle”, what do you think about it?
Felix: Terrible sound and songwriting you can clearly see that we were young and completely inexperienced with everything. I personally hate those early releases and would never touch them again.

Something you don’t hear often, I appreciate your honesty. And what about your first EP “Border Crossing”?
Felix:  We made some development here, but we were still learning.

And then…Final Gate Records released your debut album “Panzerdoktrin”…
Felix: With our first full-length we started to get better. Overall, the production quality elevated the next level. “Panzerdoktrin” got some nice songs to perform live. Artwork for this (and the previous releases) did Timon Kokott, album is produced by Markus from “Lantlôs”. We got some nice reviews and started to get on the map of the German scene. 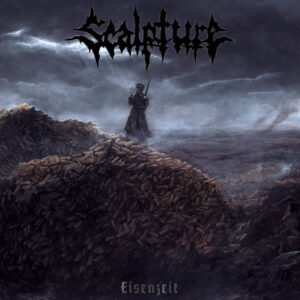 And now…your 2nd album “Eisenzeit” (CD & 12″ Vinyl released by F.D.A. Records & Fucking Kill Records), a pounding Old School Death Metal album…Can you tell us something about the writing process? And is there any difference between “Eisenzeit” and “Panzerdoktrin”?
Felix: Songwriting is never smooth for us. There are always things which get changed in the last moments before we hit the studio. The months before entering the studio are kind of stressful but in the end, everything works out fine. Thanks to Marco (Hellforge Studio) and Lawrence (Obey Mastering) we are beyond happy with this release. The artwork for this album got created by Velio Josto. We got great reviews and would have had the opportunities to play some amazing shows and festivals. Obviously, most of them got cancelled but we hope to make up for it in the next years.

It’s still simple Death Metal but we evolved as musicians and as a band. Everything is far more thought out and matured.

How did you get in contact with F.D.A. Records concerning releasing”Eisenzeit”?
Felix:  We just send a mail to Rico from FDA Records with our final product (“Eisenzeit”) and he offered us the contract. Next album will be released via FDA as well.

Let’s talk World War I! Is there are lyric your most proud of?
Thorsten: Well, I am actually pretty happy with the lyrics throughout the album as well as with the whole development process. I had some crude imaginations about topics and the directions in which some songs should go. After all I am a complete retard when it comes to actual songwriting, so Felix and Tobias grabbed some of my ideas and made great songs from that while adding a lot of own ideas and elements. So we developed a great teamwork on “Eisenzeit”.

If you want me to choose maybe “The storm…ebbs into stalemate” and “Yperite” combine the music and historical events the best way. I would recommend to read the books of Remarque especially “All Quiet on the Western Front”. Due to my history studies I have read a lot of autobiographies, sources and scientific literature on WW1. 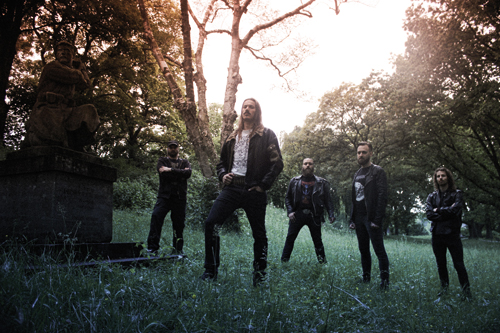 What are your expectations for Scalpture in the future…new songs?
Felix: Play shows, have fun, work with talented people and create good music. We are currently in the pre-production phase for our next album. We always try to develop ourselves and our music, but our roots lie in Death Metal and that’s what you get.

Lets step away from Scalpture a bit, as you Felix, are also involved in Evoked. Any news concerning Evoked? Are you involved in the scene in any other way as well?
Felix: Since all our shows got cancelled for Evoked too, we are currently quietly working behind the scenes. Next to my involvement as part of Evoked there is pretty much no time for anything else. We are happy there are so many talented and enthusiastic people out there who keep the scene alive. We just contribute our music, that’s all we can do.

Tell us more about your playlist. Also, any German acts our readers should check out?
Felix: I admit being slow and lazy to actively search for new music. I recently discovered Mass Worship and really love them. Same goes for Void Rot, Okkultokrati and Bütcher. You should check out Wilt and Nightbearer, great Death Metal bands from our region.

Thorsten: Same with me. I mostly stick to the eight albums I love and stay there. But from time to time I discover new bands which I absolutely fall for. Such are Dödsrit, Chapel of Disease, Regarde Les Hommes Tomber, Ophis or Ulcerate to name few. From time to time I stumble across artist from other genres as well, like SSIO or The Streets for example. Check out Minenfeld from nearby Osnabrück.

Both Wilt and Nightbearer are certainly known by us, as we reviewed earlier this year. Let’s shift to favourite labels…
Felix: Its always worth to have an eye on the releases of Lycanthrophic Chants, Raw Skull Recordz, Testimony Records and of course FDA Records and Fucking Kill Records. Those labels shouldn’t be a secret to anyone in the German Death Metal scene.

Thanks for your time! Is there something I’ve forgotten to ask you which you would like to mention?
Felix: Stay safe and try to support your local venues, clubs, bars, promoters, bands and people who struggle in those uncertain times.
Thorsten: !