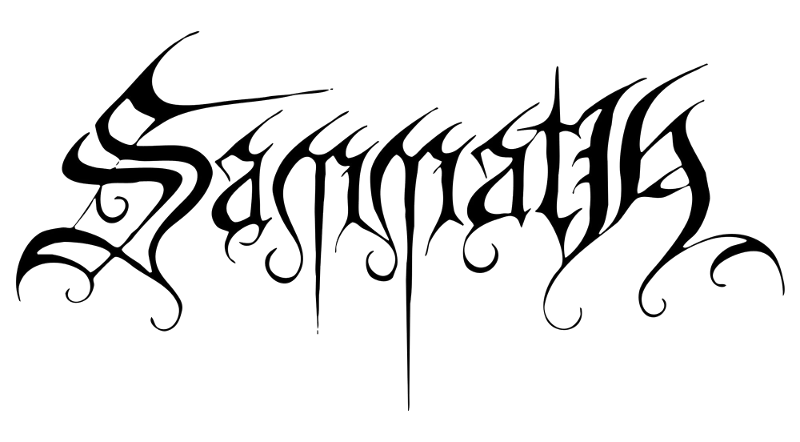 Black Dutch destroyers Sammath caught the underground by the throat with last year’s blitzkrieg ‘Dodengang’, an album that blew the Vampire crew into the middle of next week. Having recovered from the shock, we thought it was time to catch up with amiable Oz-born frontman Jan to gain a foothold in the Sammath camp. (GeraldR)

Hi Jan! I had the honour of reviewing your third full length ‘Dodengang’ last December and I think I described it as warmongering black metal – is this a fair appraisal of where Sammath is at right now?
Greetings! Thanks for that great review. To say we are at our most violent would be getting it right. It sort of built up to this during the writing of the album. I want to continue to write harsh black metal and somehow try to find my own bit of the woods. With ‘Dodengang’ I seem to be getting there. The last album ‘Verwoesting’ was fast but with a human drummer the music always seems to sound more aggressive.

The music is unbelievably aggressive and militant – were you in a particularly pissed-off mood when recording this album?
As always, we don’t really need to build up some kind of atmosphere. We can drink beers and tell endless stupid jokes or talk about women all day long, but when it comes to metal we are always in the right mindset. The drummer was ill during the recordings; he was very sick after every day. Great to see him suffer while I sat there and told him what to do whilst drinking some nice cold beers! The recording of the guitars, bass and vocals I did in my own studio, it just kept getting more and more violent, every time I met up with the drummer and we were rehearsing some ideas it always ended up very brutal. I never plan the mood of an album beforehand, when you start to write material you know soon enough in which direction you are heading.

The vocals are so spiteful. Where does all that rage come from? I thought Holland was a nice, laid back nation…
I grew up in Australia so maybe that explains it. We Aussies are a rowdy bunch. Over here in Europe it’s all very much more civilized. Where the rage comes from I don’t know, I seem to have it all in life – nice chick, money, big fucking house so I really cant explain. It’s just always there though, when drinking or going to concerts growing up I was always the idiot crazy one in the group.  There are no effects on the vocals, although I always lose my voice over a short period after recording the vocals for a album. I just scream like a pig getting slaughtered, black metal vocals that are over the top I most enjoy, like the first Hellheim cd, or Sadistik Exekution, Bestial Warlust.
Holland is a nice laid back country, people over here have got it good. I think most people in the world would rather live here then where they are right now.

I detect a lot of thrash influences in your sound. Did you guys grow up listening to late 80s thrash metal? What other influences would you cite? I feel a Marduk attitude, but you don’t really sound like Marduk…
I’m 33, I grew up with Coroner, Kreator, Toxik, Deathrow, Sadus, so I’m definitely influenced by 80s thrash. I never really liked Marduk much except the Panzer album. I was a big Metallica and Slayer maniac in the early ‘eighties. I remember getting ‘Endless Pain’ by Kreator, in ‘85 I think it was. My biggest influences on music though are old Gehenna, Sadistik Exekution, Bestial Warlust, Hobbs angel of death, Mortal Sin. And early 90s black metal.

Any news on a follow-up to ‘Dodengang’? What kind of noise can we expect next time around?
The next album will be a continuation along the lines of ‘Dodengang’. What I want to do is to keep trying to write more songs with less dense guitar riffing and easier back-to-basic type riffs. I think more thrash and doom shall find their way into the music, but most of all fast as fuck black metal. I’m looking to keep the sound varied but also very brutal. The next album is already in progress, I don’t want to wait three years in between releases anymore.

Can you provide me with a short history of the band? What is the purpose of Sammath?
I started Sammath in ‘93, just after I arrived in Europe. The first demos I wrote all the music for and someone else did some arrangements as he had recording equipment. After the demos he just wanted a normal life I think, it all got very boring to work with him. It seemed that black metal was just a phase for him; for me it’s more of a total look on life. In ‘98 the first album ‘Strijd’ was released through Folter, various labels showed interest back in ‘97 but I chose Folter due to its status in the underground. I’m still there after ten years. In 2002 I released the ‘Verwoesting’ album and then in 2006 the first cd with a real drummer, ‘Dodengang’. The purpose of Sammath is to create brutal yet melodic black metal packed with influences of all forms of brutal metal.

Do you feel like you’ve achieved many of your goals so far?
Just about all. I’m really satisfied with the last album, even after six months  I still listen to it without hating some parts or wishing I would have done something differently. I really want to create an album in which all my influences appear but that it sounds original, very hard to achieve. Getting the live shows more brutal and to play live on a regular basis is what I’m looking to achieve, buts its very hard with five people in a band, always someone who has to work, study or whatever. It was a lot easier when I was alone.

Do you enjoy playing live? What has been your most memorable gig to date? Any nice ones lined up?
Playing live is great, the first years it wasn’t possible due to me being Sammath alone from ‘97 ‘til 2002. From ‘94 ‘til ‘97 we were a two-piece outfit, also impossible.  Since I formed a band in 2002 we are looking to do more live shows. June 28th in Nijmegen with Salacious Gods and Gheestenland will be our first gig in five years. Then, two weeks later, at the cult fest Under the Black Sun in Germany, organized by Folter, some great bands will be there like 1349, Watain, Inquisition, Decayed so it’s a honour to share the stage with these bands. It’s always a great show at Under the Black Sun, almost every band is pure black metal so it’s a pretty intense experience, and the beer is always there in huge amounts backstage, also something good.  Next year we will be off to the States to do two shows so things are improving. In the winter we will be doing more live shows, some plans for a tour are starting to work out, we will see what happens. Most memorable gig would be Under the Black Sun in 2002, we only practised eight times before going onstage, my first live gig since high school back in ‘87.

Unless my eyesight deceives me, there appears to be a girl guitarist in the band. Was this something you were apprehensive about at all, considering how narrow-minded a lot of BM fans are? I suppose it comes down to talent at the end of the day, right?
When the drummer first informed me of her I was really not that enthusiastic at all, but as she’s good to have in the band, with two guitars it simply sounds better live. For the audience looking at a nice looking chick that plays well must be better then watching the ugly fuckers you mostly see. She is damn dedicated, I was as I mentioned  a bit sceptical at first, but she’s proved me wrong and has shown to know what black metal is about; she seems to have the right feeling and plays the tracks just how I wanted/expected her to, but without having to explain it. Black metal to me has certain boundaries as I really feel true to the roots of black metal. In some ways the borders are expanding too much, having a dedicated female in the band is a totally different matter in my opinion.

If Michael Jackson asked for permission to cover a Sammath track to re-launch his career, what would you say to him?
The track  ‘Met de Strijdbijl in Mijn Hand’. I’d piss myself laughing watching this. He could adjust one word to make the track fitting for his life story.

What other interests do you guys have outside of music? Do you all have to work full-time jobs to sustain the band?
I read a lot of history stuff, I used to teach history but now I’m self-employed, work in the summer and free time during the winter, and I get drunk at the pub or concerts on a very regular basis. Everyone else has a job, the bass player is still at studying. The band doesn’t make enough money to live from, nor is this my intention, for me black metal and money simply don’t mix.

What do you think of the black metal scene in general at present? Which bands are you enjoying most?
The scene has changed a lot since ‘94. It’s so big that you don’t know who the fuck’s who anymore. Contact used to be bigger, through lots of trades, tapes but some of that has died out. I’m always glad there are still a lot of people I know from ten years ago at shows. Some myspace black metal kids or fun bands and shit like that still amaze me, or Christian black metal. It’s all you can’t do shit about but very annoying. I get some mails from kids who are black metal with band pictures in corpse paint and slipknot shirts, I suppose you have to start somewhere. As long as the scene is alive it’s ok, but sometimes I wish it was all as small as in ‘93 or earlier. I really believe that the true meaning and basis of black metal, although it’s interpreted in many ways, should always stand for intolerance, hatred, disgust for religion and a truly violent music. The “I’m so pissed off and sad at life” and “no-one understands me” or as mentioned Christian scene is totally raping what it stands for. Also, people who just are in black metal because they are total social morons and have no feeling with the music at all pisses me off, but what can you do? The Dutch scene is very good the last years. Salacious Gods, Brandhaard, Sauron, Fluisterwoud, Cirith Gorgor, Fenris, to name a few. Also many interesting albums from newer bands such as Graupel from Germany, and long running bands also still bring the good stuff now and again.

Do you believe the world is fucked? What with wars breaking out all over the globe and the climate in meltdown, it’s not looking too good for the future of our race…
I am looking forward to it, nice warm days, get your own wine and palm trees in Europe, screw the next generations, they will find a solution. Everyone always said the world is fucked but it seems we will work it all out, on the verge of destruction we will save ourselves and if we don’t, who cares. Millions of planets, we don’t mean shit. Does it really matter?

Finally, can you give me one word to describe Sammath’s view on each of the following:
Peace: Boring
Satan: Interesting
Nuclear power: Death
Literature: Inspiration
MTV: Tits
Reality TV: Weird
Black metal: Power

Thanks a lot. If there’s anything you’d like to add, feel free:
Metal or death!!!!