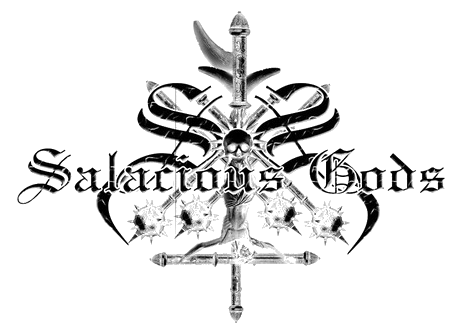 Born in 1994 Dutch black metal band Salacious Gods have managed to establish their name in the black-metal underground scene by releasing a demo and 2 full length albums on Dutch record label Cold Blood Industries. Their newest Opus “Sunnevot” will be released later this month and was reason enough for me to send some questions to lead vocalist Steakelhorn. Check out what he has to say about one of the most promising Dutch black metal bands…….(KasperR)

Hail to you mr. Steakelhorn, how’s life ?
Good thanks

First of all could you please explain your nick name to the readers ?
Steakelhorn means as much as horn of thorns, it is a combination of two Drents words that makes it so special. So it is not a Nordic Mythic word.

Were have you found it and what does it mean to you personally?
I think a lot of people have nicknames even outside the black metal scene. So what can I say it’s just an artist name. Never though about how it felt. But it feels good, I react when the call me by my nickname. That’s all I can say.

You have recently recorded a brand new album called “Sunnevot” which is filled with bombastic black metal songs who are all very diverse from each other in my view, do you agree with this statement?
Yes I agree, the songs are very diverse indeed, but personally I think that the songs on the new album our less bombastic then on the previous album. Due to the fact that the keys are less dominant.

How did the recording process go?
First the Drums were recorded, guitars, bass, keys and at last the vocals. Recordings were done in the weekends over a period of three months. This album was recorded in the KITCHEN of Franky. Same as the previous album.

And what is the main difference between The first album “Askengris” and the new album “Sunnevot” ?
If you mean musically, the keys are less dominant on this album as on the previous. So this creates a sound that is more aggressive then the sound on our previous album. Recordings were actually the same for each album.

Who’s responsile for the art work?
The dude is polish and his name is Jacek Msniewski.

What do you think of today’s black metal scene? There are still a lot of good black metal bands now a day. A lot of smaller bands vanished into thin air and ofcourse the death-metal scene is getting bigger and bigger everyday.
What happened to the death metal scene 4 or 5 years will happen also to the black metal scene. Bands will vanish because there are too much and they can’t bring anything new into the scene. But we will try to survive this period by releasing more albums and do more gigs. And it will become harder for new bands to earn a record deal as before..

How’s the black metal scene in Holland?
It’s small but we’ve got some high quality bands like Liar of Golgotha, Cirrith Gorgor and Ordo Draconis.

Do you think it makes a difference if you’re from Scandinavia or Holland? If so what’s the difference !
YES, In Holland we can only copy what’s done in Scandinavia. I can’t name any band or country that was that important in the death and black metal scene like Sweden and Norway. Of course a lot of good bands emerged after a while in Holland and in other countries. But is makes a difference everyone knows that. And I think they will be always one or two steps ahead of us .

What do your lyrics deal with ?
Our lyrics mostly deal with occult themes. Were as we don’t want to spread a message to the people. My suggestion is just read the lyrics yourselves and judge for yourselves were they are about. Because over a 50% of the people don’t have intersed in the lyrics.

Do you consider yourself a satanist and what does satanism mean to you ?
No, just another religion.

What can we expect of a Salacious Gods live-show ?
Aggression

Do you play live very often ?
What is often, I think as often is possible. For our Askengris promotion we performed not enough I think we did about 5 gigs. I was a way too the US for a year, so we had to find a replacement for that time. I think that explains it all. As we just discussed the black metal scene will reduced so it’s harder to perform these days. Therefor we just want to make good albums to earn our performances. So, in the future we will try to do a lot of performances. At the moment we are on the road with God Dehroned and we have a gig in Berlin with Eminenz.

How is the co-operation between Salacious Gods and Cold Blood Industries ? Are you satisfied with the work that they do for you ?
Of course there are always some points of discussion but overall we are satisfied with the job they did for us. We can’t complain. The work that they and we have done over the past years worked out fine which resulted in two good albums if I may say so.

What are your personal goals for Salacious Gods ?
My personal short-term goal is to find a good new label that will support our music as coldbloodindustries did. After that we want to make some good albums as SUNNEVOT.

I would like you to give me some comment on the following words:
I’m not fond with these sorts of questions but anyway I’ll give some short reactions.
I know, why do you think I ask those questions? Haha
-Corpsepaint: Have to wear it otherwise you are not evil!! haha
-Dimmu Borgir: made some excellent albums if you ask me.
-Death metal: Still one of my favorite music styles
-Cirith Gorgor: Black metal from Holland
-Warlust: Black metal band from Holland (heard some stuff of ‘m, sounds good)
-Norway: Black metal country number one.
-Drugs: That is a material were you can make loads of money with.

I know it sucks and it’s very standard but any last statements or comments for the readers of Vampire Magazine ?
Yes I know it is indeed very standard so I will give a standard answer. So, thanks for the interview and good luck with the zine , keep on drinking alcoholic fluids, fuck some women for me or no, I rather do it my self. CHEERS!! If you have any additional questions feel free to contact me.
Thanx for your time and I wish you good luck for the future….