Both the demo and EP got solid reviews here at VM-Underground. Since the Chilean duo called Phantasmagore impressed me as well I decided to send them some questions to answer. More people should get to know this band especially since they’ll be performing in Europe soon too. (Pim Blankenstein)

Hey guys, thanks for your time answering these questions. Since you are a relatively new band can you tell us a bit about the formation of Phantasmagore?
Cheers Pim! Thank you for inviting us to answer this interview.

Phantasmagore is Rod Torrance (drums and vocals) and Charles Dexter Ward (guitars and vocals). For the live shows we played with Beto a.k.a. RIP (Bass) and right now we are rehearsing with Horrorhammer, who is gonna play the drums for the European tour, and Rod is moving to the bass.

Your band’s name is quite striking and seems like a reference to phantasmagoria. Perhaps you can tell a bit more about how you came up with this moniker?
It is. The first part of the band’s name came from Phantasmagoria indeed. As you might know, it was a kind of old school horror show in the late XVII’s century, which the attendees had to get kind of doped before the presentation, so the visual effects made your mind got into the horror scenes. And the GORE part of the name, well…. It needed a death metal surname.

You operate as a duo and you use pseudonyms that obviously refer to Lovecraft and The Shining. Why did you decide to use these names and I assume you are massive horror fans?
Yes, we are such fan maniacs of it. We wanted to have something of our favourite’s stories just for kidding between us. Anyway, those names have relation with our real ones. 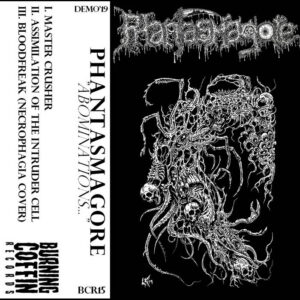 In 2019 you debuted with your demo “Abominations” digitally. Can you tell a bit more about the recording session of these songs? You used different studios, right?
The recordings took place in 2 studios. The drums were recorded at “Salas Crearock”. That is a place in Santiago that has a lot of rehearsing rooms for rent, which we have been using for several months. All the strings and vocals were recorded at Necrotic Studios, which are owned and ran by a close friend of the band, B. Barrantes. He had already worked mixing and mastering death metal, so he got the sound we wanted to be like. Both mixing and mastering were made by him as well.

Even that we already had all set up to have the physical release, we published it as soon as we got the master versions of the demo. Anyway, just a couple of months later the first press came out by Burning Coffin Records.

Who actually recorded the bass-parts? On the cover he is mentioned as R.I.P.
For both demo and EP, Beto a.k.a. RIP was the man. He is the brother of Charles, and a close friend of the band. He recently left the band to attend some personal stuff, but since he collaborated during a long period of Phantasmagore’s existence, he is an important part of the band.

Next to two songs you penned yourselves you also recorded a Necrophagia cover. Can you tell a bit more on the decision to choose this particular song?
Necrophagia’s “Bloodfreak” is an anthem for us you know. Since we became friends long before Phantasmagore started, we enjoyed watching and listening to Necrophagia’s “Through The Eyes of the Dead”, and “Bloodfreak” got our attention as it is very gory and has a primitive sound. It makes you get really into a Horror Movie with a Death Metal music on it. We also had other candidates for songs, but all of them were from Necrophagia.

Later on your demo was released in physical format several times by various labels. Can you tell a bit more about the various editions including the split with Fleshrot and how you got in touch with those labels?
The first press was made by Burning Coffin Records (Chile). We already had the contact with Kenny, so it was talked about long before the recording was ready, to have our demo released with BCR. It was 100 copies in white shell, which were sold out in a few days. Thus, the same label decided to release a 2nd press in transparent purple shell a couple of months later. Between those releases, Headsplit Records (US) released 150 copies in green transparent shell format. In this case, the contact was made through Kenny, who had been in touch with Dylan (Headsplit), since they were having trades between them.

Some months later, the demo was released by Unholy Domain records, which had contact with Rod, as the label had already worked with him some years ago with Putrid Yell. This time, 100 copies were released in white and yellow shell with a red version of the cover art.

All the releases mentioned were in tape format, so a year after Unholy Domain’s, we were asked by Dark Recollection Recs. to release a CD version. We thought that the demo was quite short in duration, so we offered to release a split with other metal band. That’s how we got in touch with Fleshrot, and they kindly accepted to be part of that release. That’s how the split got released by mid 2021, with both Fleshrot’s and our demo with a new cover art.

And last year, it was released as a vinyl version, in transparent and black colour formats. It was a co-release by Burning Coffin Recs, Dawnbreed Recs and Life After Dead. For that version a new cover art was made, and the cover song was taken out, in order to the limit of duration that 7 inch vinyl has.

How has the overall reception been by both fans and press of “Abominations”?
From our point of view, we think that it was quite liked by fans. All the versions that the demo had are sold out, so that tells us that a good work was made. So far, we have received good comments about it, from the cover art made to the music itself. 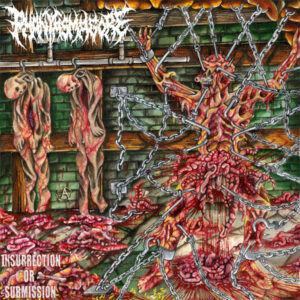 Your latest recording is the five song “Insurrection or Submission” EP. Next to the Necrotic Studio you already used on your demo you also recorded at the DM6 studio, that’s becoming a household name in Chilean death metal. Anything exciting to tell about this recording session? I guess you are pleased the way the sound turned out on this release?
Have you watched Jurassic Park? As you mentioned DM6 studio is quite known in Chile, because the equipment there is ideal to record death metal. For the EP, we wanted to have a “fat sound” on the drums, so recording the drums there was perfect for the sound we wanted to have in the EP. That time, the bass lines were also recorded at DM6. Just the guitars and vocals were recorded at Necrotic Studios.

For this process, Sebastián Muñoz (aka Sewa, Putrid Yell’s drummer), collaborated with us. He was part of all the rehearsals, the cymbals used are his and he also made us suggestion from his personal experience.

In all the process, we smoked a lot of dope. That’s why some people think that the EP has some kind of weird things on the composition.

Once again you used a session bassist but who is Beto? Is this the guy from Necropsia? Perhaps we already covered this as he might also be RIP?
Not at all. We don’t have any relation with Necropsia.

The instrumental track “Deadly” was written by the late Arturo Fabres (a.k.a. Dr. Ash) of Putrid Yell in which Rod is also active. So, was this piece of music originally written for Putrid Yell? Or is there another story behind it? And what can you tell about the outro part of this song, which was done by Parallel Noise?
The song was originally a sample track that Arturo was willing to use in another project, besides Putrid Yell. After he died, we decide to play that song as a posthumous tribute to him and his project Deadly. That is why the song is called like this. Most of the song has parts of the original idea, but we put some of us on it, so it sounds like Phantasmagore.

About the outro, Rod knew Parallel Noise, who is used to do music things using weird sounds. We wanted to have something like that as outro for Deadly, so we asked him to do something for us. From a longer track he made, we used just a part of it, which is the one you hear as the current outro of the song.

Once again “Insurrection or Submission” was released on various formats by various labels. Why do you actually use multiple labels?
Basically, is because we have not received an offer from a label to release the EP in multiple formats. That is why one label release the tape, another the CD, and so on.

Another reason could be that we want to reach as many locations as possible, so have releases in more part involves achieve this goal.

On your Bandcamp page you ask for a label to release this EP on vinyl. Any news on that yet?
Dawnbreed Records from Netherlands is already working to release the 12’’ format of the EP. By the end of this year, we will post updates about it. Stay tuned. 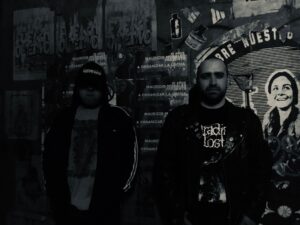 Even when you are a duo on paper you have been performing live where you use a session bass-player. Once again who is this bassist and is he going to be part of the live band for the upcoming shows you have?
So far, RIP has played the bass in the live presentations. As we mentioned before, for the European tour Rod is moving to the bass, and Horrorhammer will take the drums part.

For composition purposes, we keep the classic line-up as duo.

Concerning live shows; you are coming over to Europe in September where you will perform at the new Tones of Decay festival in Prague in the Czech Republic. You will also do a short tour with Finland’s Cadaveric Incubator, which is currently booked by Killtown Bookings. I guess you are looking forward debuting on European soil? What are your expectations?
We are eager to play in Europe. Is the first time that we are playing abroad. We expect to meet as many bands as we can, go to many places the tour allows us, and learn a lot of that experience. From our side we are rehearsing to play the most insane and filthy death metal, to make your guts get sick.

I think we covered it all. So any last words you’d like to share with the readers?
Thanks again Pim for having us. It’s an honour for us to get considered for this interview. See you all in the Euro tour. Come to the shows and grab our stuff.