Despite the fact that VM-Underground tries to blend the two worlds of nowadays technology (Have we not all become…The children of technology?) with old school attitude as much as possible, it’s still interesting to check out the world of vlogs. You never know what you stumble on upon. Thanks to the Youtube channel All Hail Hel I heard a sample of the new Nachtwraak album, which caught my attention immediately. Epic well composed Black Metal which has a raw and a bit of Russian-scene / old Nordic scene edge…Sywert en Plaag give you an introduction of Nachtwraak and the new album “Unheim” (Ricardo)

Once called Tempus Fugit you have changed the bandname into Nachtwraak, what was the reason behind it?
We both started together with two of our friends under the name “Tempus fugit” arround 2002/2003 (an exact date is uncertain). We were all fans of bands such as Mayhem, Burzum, Darkthrone, Dissection, Bathory, Marduk… and we wanted to make such extreme music as well. We were close friends and has a lot of discussions in the weekends (with lots of booze for sure!) about the real terror in our own lands and way of living. With the ways how our government and the cowards of the union totally destroying our roots and culture, just as the christians did centuries ago. In our opinion Christianity is still an enemy, but the Islam and every other belief or culture which are trampling our ways are the true enemies at the moment. So then we decided to change our name and lyrics to Dutch and that was when “Nachtwraak” was born.

Your new release “Unheim” is released…What is the reason to release it yourself? You would like to have total control of your music, or none of the labels offered the right deal for Nachtwraak? For you as musicians, what is the difference between “Unheim” and your previous albums?
One big difference is that we take care of all the instruments with only the two of us now. I understand that this needs an explanation, so here it is; Shortly after the recordings of the “Wolfstroon” promo back in 2006. The band splitted up because of the lack of interest by our second guitar player. This traitor just didn’t show up without letting us know and then seems to be vanished for a while. It still makes us mad, but he left us an amplifier which we still use for our rehearsals and recordings haha! We decided to totally produce it for our self because then we can put on the recorder as soon as we feel that it was the right moment, It gains us the opportunity to fully concentrate on the atmosphere without being distracted through the pressure of a studio recording. Maybe we draw some attention by labels through our new album. It will be nice to have some distributors around the world who know how to attract the right buyers with the same Idealogy as us. But as it seems so far we arehappy with the way we recorded our album and the next one will be recorded the same way (most likely). Maybe we buy some better mics and recording stuff but that’s all.

In my review of “Unheim” I mentioned “…I heard fierce melodies, variety and a good combination of 1990s Nordic riffs along with Blazebirth Hall and Ukrainian influences”, Do you agree musical wise? Do you think these influences are present in your songs?
No doubt, I can imagine we have influences of those acts as we like to listen to them. But it is unconsciously. I dare not to say if it contributed to the end result.

The lyrical content seems to be a combination of darkness, seclusion and history. Does certain books, historical events or movies influence you, or is it just a simple fiction that comes up when composing the music? What does “Unheim” means? Has it a connection with the German word “Unheimlich” (translated in English: eerie or sinister)?
Nice question! Unheim indeed has a connection to the German word “Unheimlich” and especially the dutch variant “Unheimisch”. In our mind Unheim is a synonym to the name of our land “Nederland” and the way we feel about it and what will become of it. Our lyrics are mostly reflections from historical events or legends to the trouble nowadays. “De nacht fluistert sagen” Is about a dream of reclaiming our soil and fortress through a bloody war and when you wake up you are still stuck in your shitty life, with your shitty job etc. “Ontheemd” Means uprooted and this should say enough.”Vlammen van vergelding” is a more traditional song in black metal about a priest who will be burned to death as a sentence for all his mistakes. “Een schreeuw uit het verleden” Is about the legend of Widukind and the desecration of Irminsul. “De Gloeiige” is about a dutch legend which tells the tale of surveyor who died before he planted his last Landmark, his spirit still Haunts the borders and you can hear his weeping through the Night. “Ratten van Unheim” Litterly means Rats of Holland and it is a fist to all scum that slipped through our borders without intention to integrate or at least honour our ways!

What does the band have available? Do you have merchandise to offer? Where can all this stuff be accessed and how can anyone who feels interested contact you?
At this moment We don’t have any merchandise to offer, it will be nice to print some shirts in the future, but focusing on our music is our main buisness of course. For contact or if you would like to buy a cd you can contact us through nachtwraak@hotmail.com or leave a message on the facebook profile.

And what will the future bring for Nachtwraak?
Playing live with session musicians is an option, although that we are both critical persons. If we contract session musicians they should be one with our idealogy otherwise it won,t work for sure. It will be great to record some tracks for a split-cd but we don,t have contact with bands to share a record yet. Whatever there is happening, we keep writing new songs and there will be new material in the future for sure! 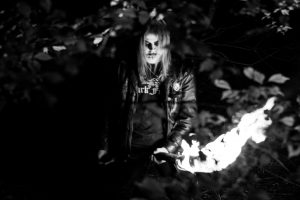 Now a more general subject…Black Metal as a whole….
Black metal is definitely more then music to us, feeling and atmosphere are the true elements for a decent black metal release. It is the art to express hatred, depression or solitude within a musical form. Without a convincing spirit, black metal is not more then an empty shell. It is hard to explain this in words since it is all based by an undefined sense. Decent Black metal posseses the power to open gateways to darker times or dimensions which you will enter once you are stunned by it’s magic.

That’s all for now, thanks for introducing Nachtwraak to us… If I left something uncovered, feel free to add it here!
With all the terror going on in France an Belgium. Do you all think it will stay there??? Don’t be so foolish!! Blood must be paid with blood!! let them hear our call! …War!