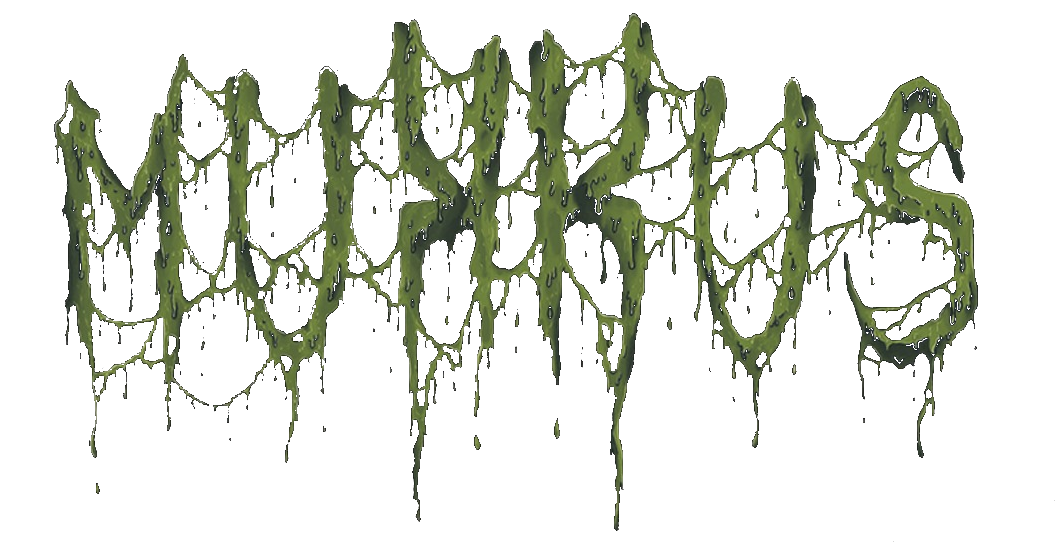 Today we take a look at Mukkus records, a young Death Metal Label in Clermont Ferrand, right in the middle of France. This interview was conducted during one of their shows (Blightmass, Heksen and Nephren-Ka, Jan. 25th 2020), thanks to Arnaud and Ange for being so generous with their time and words, and keep an eye out for their future projects (they do have a Grindcore night planned for Valentine’s day which is quite fitting!) (Nezu)

Hi, please introduce yourself!
Hi, I am Arnaud, head of Mukkus Records, an organisation, or maybe more of a label. That’s our project, to be an Extreme Metal record label.

A bit like Les Acteurs De L’Ombre, is that what you’re going for?
We’re not aiming that high at the moment, even though they would probably say that it’s not easy for them either. Our idea is really to help the bands from Clermont-Ferrand, whether it is for a recording or a music video, financially as well as giving them some extra exposure. The thing is to put them on the map and give them enough traction to be signed on something bigger, if one of our bands tell us they are leaving to sign on LADLO for example, we’d be thrilled! It’s a bit of a struggle right now, even just to find venues for the shows, except for the Raymond Bar which is quite open, most of the places are either too expensive or not open to organisations outside from Clermont, so we’ve been thinking about relocating there proper!

How many bands are involved at the moment?
There are 4 bands right now, and their members are all contributing to make sure the events go smoothly! First there is Teeth to the Flesh, they are kind of hard to define stylistically, a lot of influences from the 90’s and 00’s with an old school feel. Then Grimhowl Grave, more of a Dark/Death Metal band. With Hardverne we have more of an OSDM feel. And last but not least is Abcest who are a bit on the Brutal Death Metal side of things, they define themselves as DM but they are a bit harder than the rest!

OK, and so the different members of the bands are doing different things for the label? I see you are taking care of the sound downstairs
Exactly, I am a sound engineer so it’s pretty normal for me to do that but we’re not looking for skills that specific. For example Luca, the bass player from Abcest, who likes social media does that quite a bit, Joann who sings in Teeth to the Flesh does animation and video so that’s also a very interesting field. But to organise this type of event one doesn’t need very qualified people, except for a sound engineer of course, and someone who can handle the bar, but what’s needed is the organisation, one person is doing merch, one person is taking care of the door, everyone can help! But yeah, with 17 people in total it is a bit too many for events like that.

Yeah, but that’s cool if you can rotate so that everyone can enjoy the show
Absolutely, we’re also here to have fun!

Yeah, and I would assume that just starting like that, you probably aren’t making money…
Well… Our first event actually went really well on that regard. All four bands decided to play and not take any money, and there were quite a lot of people there! That definitely was a bit difficult to play and rotate at different spots but it worked. That definitely was a great start and allowed us to carry on a month later with tonight’s show, plus we’re helping out a friend for a Grindcore night soon. We’re really trying to create a good dynamic and to push things forward! We have in mind to work with Metal in Veins, another organisation doing just shows, because our goal is to focus more on the label side of things. The great thing there is that they know we have a good network of bands already so we can act a bit more like curators for them. And since their mission is to help out emerging acts there’s a great synergy!

Hey!
Ange: Hey! I am Ange, we started Mukkus with Arnaud and the other bands, so I am not sure what you already said?
Arnaud: I presented the bands and the label…

Ange: I heard that you spoke about the shows with Metal in Veins as well, just to be clear we still intend to put up our 6 shows a year in order to get some funds to help the bands. We also want to push the Death Metal side of things, but I really like the organisation of shows so I’d be pretty gutted to drop it altogether.
Arnaud: No we wouldn’t do that but it’s to fund the label activities
Ange: Yeah exactly!

Arnaud: The thing is, as an NPO in France you need a show licence if you want to organise more than 6 events a year. That’s still a show every 2 months, it’s cool but it’s better if we could do one a month, especially since we’ve seen that there is a demand for those, be it in Clermont or around. There’s a hunger for Extreme Metal! With Hardverne we went to play yesterday in Aurillac for another organisation, that was their launch night, and it was a pretty big success for them as well, the public was really into it from the get go!

I have to say I am very impressed, in Avignon where I come from there doesn’t seem to be that much of a scene…
Arnaud: Well that’s a bit of an issue with metal in France, it’s still considered too grim and isn’t really welcome everywhere. But here in the Raymond Bar it’s a bit more open, there’s everything, Metal, Punk, Hardcore, Noise so of course it’s a bit easier.

Ange: Yeah but we also have similar issues when you see that the Raymond is one of the last places standing when it comes to extreme music, there used to be a few more bars but it’s slowly dwindling. Our will was really to push DM, there’s a lot of Hardcore, some Crust Punk, but not much Death Metal and people were very excited when we launched so it’s a great feeling!

So what’s next for you guys? More events? Maybe a release?
Arnaud: A few more shows are coming, we’ve been contacted for a few dates, but we have to discuss with everyone after the weekend to see how we can organise things moving forward. We also want to know what are the different bands’ projects for this year. I know that with Hardverne for example we’d like to record an album, so how do we finance it is the question.

Ange: I think we are going to finance it ourselves for the most part but we’d like to use the label side of Mukkus for that as well. I know that usually labels back the bands financially and then take a cut on sales until they are paid back, but that’s a bit hard considering the current situation regarding sales, so we’re exploring different leads and some alternatives to that system. Ideally we’d like to get closer to bigger labels for distribution or get a dedicated distributor and even though that’s a bit out of our reach right now that’s the goal. We would like to be able to back the bands financially while keeping ourselves afloat and expanding slowly to other bands or projects. So right now we are focusing on our area but we would like to change that in the long run.

Arnaud: Yes, we would like to broaden our horizons, both the bands’ and the label’s, the show we played last night was because we had one of the bands on the bill to play a show last year and they wanted to do the same for us, that’s a great dynamic. We loved it, and they want us to send another band for the next time, we were thinking about Abcest, it’s really this type of exchange we want, very amicable.

Ange: That’s why we need to grow, to be solid enough to at least pay gas for the bands even if we can’t pay the bands just yet! Exporting themselves without losing money.