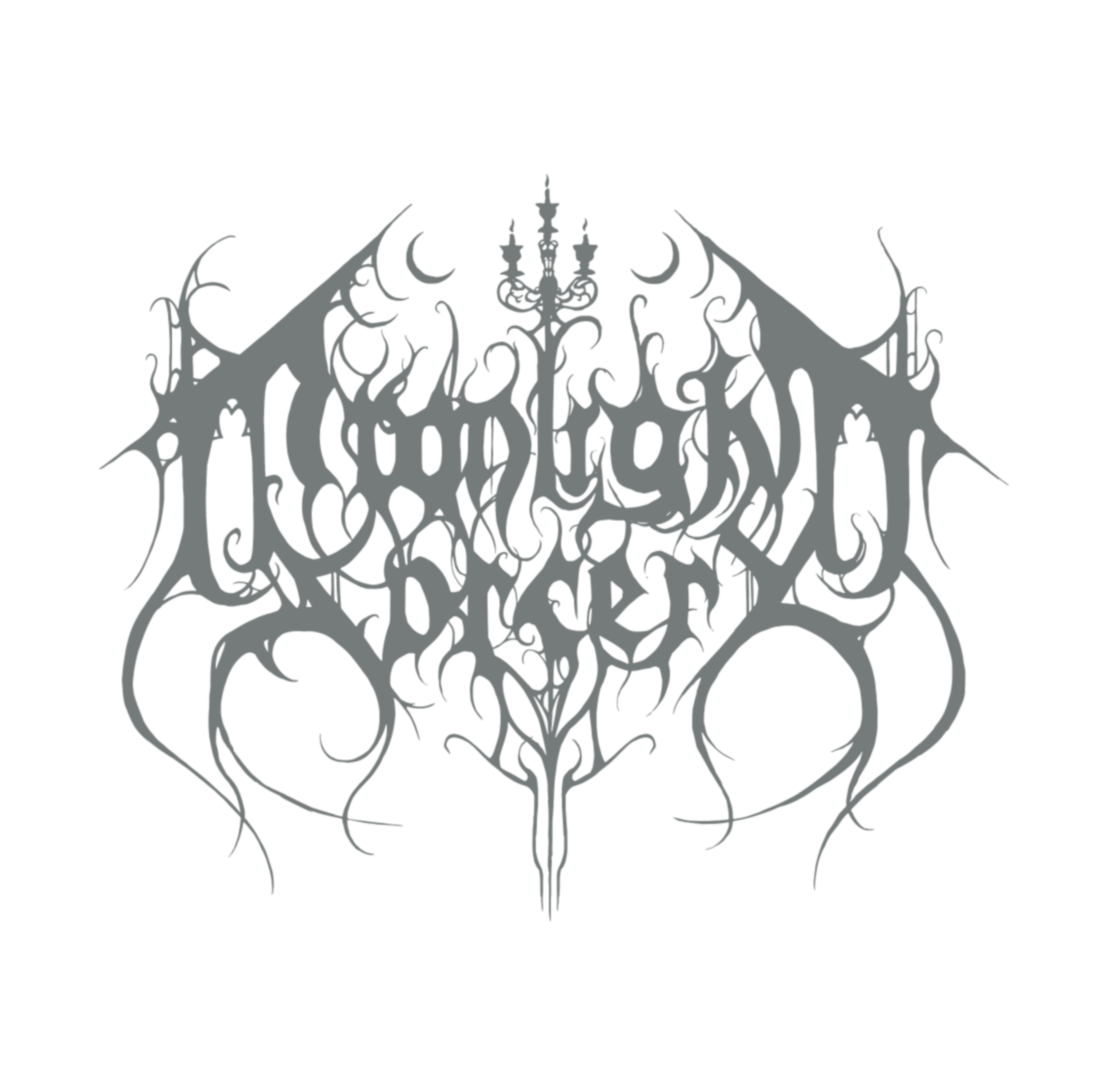 One of this years’ musical highlights for me is definitely this Finnish band Moonlight Sorcery. They had digitally released their EP in February this year, after which Avantgade Music was the chosen label to release this pretty little gem of Symphonic Black Metal on physical formats. At the time of writing, the vinyl version is already in its third pressing, so I am definitely not the only one who thinks positively of their debut. Time to ask this promising band some questions…

Might not be the most original question to start off with, but, since Moonlight Sorcery is a new star in the Finnish metal scene, can you tell us a little about how you got together as a band and how you got through the first formative years?

Ruttomieli and Taikakallo have known each other for over ten years. It was not until late 2017 when an idea of a black metal band was born. We started to make music in early 2018. Things went on quite leisurely, there was absolutely no rush. Haaska joined a few weeks later and the whole idea of the band started to really take form. We had been demoing a lot of material during the years after the inception and at the beginning of 2021 things really started to pick up speed. The songs were already there but this was when we really started to make plans for a demo release. We started planning the cover art and the logo. Eventually we were so satisfied with the quality of the recording that we wanted it to have a proper release. So now we’re talking about an EP and a debut release.

Of course there were some setbacks and delays with the pandemic and all but the end product is better than it would have been with pointless rushing. 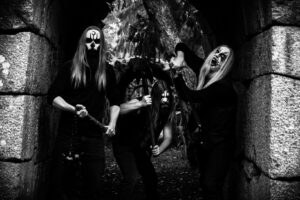 The 5-track EP called “Piercing Through The Frozen Eternity” sounds really crisp and clean, in a good way. Can you tell me how you got to this sound? I believe Henri Sorvali (who worked with bands like Finntroll, Sargeist, Mooncitadel) was involved too? How do you look back on this experience?
The EP was recorded in various places in our home studios. The drums were recorded by our session drummer (Tommi ‘’Tomahawk’’) in his rehearsal place. We produced the EP by ourselves. Henri did only the mastering and that’s all the contact we have had with him during the whole process so we can’t really give any opinion on it would have been to work with him. The mixing was done by Riku Jaakkola.

Though “Piercing Through The Frozen Eternity” sounds like 90’s black metal at first glance and fits in the current reviving symphonic and melodic black metal scene, Moonlight Sorcery has a remarkably rich sound with loads of interesting guitar leads and twisting melodies. Quite a lot of classic heavy metal is entwined in your sound. How would you classify your music in terms of musical influences?
The classic heavy metal influences come naturally since Loitsumestari Taikakallo is mostly influenced by old heavy metal. That really adds something original in our soup of influences. The whole black metal scene from the 1990s is also a huge influence, the symphonic and melodic branch in particular. So sympho/melodic black metal is fine with us because the goal in the first place was trying to have lots of rich symphonic/synth elements as well as many guitar leads and solos in the music.

Listening to the EP, it sounds all very natural, almost organic and it reminds me of great times from the mid to late 90’s. Bands like early Limbonic Art, Obtained Enslavement or Odium springs to mind. How do you, as a musician, listen to your own work?

The goal is to make music that we would listen to ourselves so we are all very pleased with how the end result of the EP sounded. The bands you mentioned have definitely been among our influences. 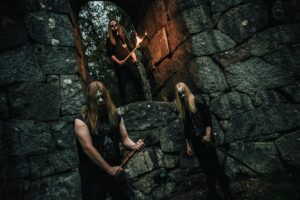 The EP was recorded and released digitally and picked up very quickly by Avantgarde Music. Were you already in contact with them before you released the EP or what is the story behind this? And what can we expect from this cooperation with Avantgarde?

We sent promotional packages to a few labels before the EP was released but there were also lots of interest and contacts before even releasing any music. After we put out the first single song then it really started to pick up on people’s radars. Avantgarde Music was one of the labels that got interested. We negotiated with a few other labels too but decided to sign on Avantgarde as we felt that they can really offer us the best platform to grow and make the music in our own vision.

Most of you guys haven’t been in any other bands before, except (Loitsumestari Taikakallo) and because of that Moonlight Sorcery are newcomers to the very fertile Finnish breeding grounds for extreme metal. How do you find your place in your local scene and is your Finnish background important for your (musical) identity?
We haven’t really given any thought to our place in any scene. We just do our own thing and people seem to really like it. The background mainly shows up in our lyrics as we do include Finnish and English both but that’s about it. The music is made on a personal level. Guess the Finnish landscape, nature and mythology shows in our lyrics, so in that regard being Finnish is important.

Something I am always curious about is the personal (musical) influences that makes someone the person he (or she) is. What are the most recent records you have bought or enjoyed?Loitsumestari Taikakallo: I really enjoy all kinds of music. There aren’t a lot of genres that I don’t like. Most recently I have listened to Shadows Fall, Savatage, Bruce Dickinson and 3 Inches of Blood. I like to collect LP’s and Baccara: ‘Baccara’, Yngwie Malmsteen: ‘Eclipse’ and Gary Moore: ‘Wild Frontier’ are the latest LP’s I have bought.

Ruttomieli: I listen to a lot of music everyday trying to find some buried gems from the 1990s but I guess my latest discovery was Ufych Sormeer and their album “Anthem to the Glory of the Great Octagon”. About this year’s releases, Grieve’s “Funeral” was really really great. The last time I bought something, it was Marduk’s “Fuck Me Jesus”, few Forgotten Silence albums and bunch of other used CDs.

Haaska: I have been listening to a lot of the new Exodus album and also the latest Wolves in the Throne Room album has gotten quite a lot of listens from me. I scour through many bands daily but these ones came to mind in particular concerning the latest releases I have really enjoyed. Latest albums I bought were most likely soundtracks to the video games Silent Hill 3 and 4 as I am really into everything horror. 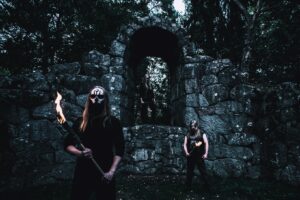 The EP is now about half a year old, I think the reactions have been very good. I also saw that the vinyl version is now in its third pressing. How do you look back on the past few months?
We are positively really surprised at the response of the album. Of course we were happy and excited when we saw the first pressing come out and we knew that we had something in our sound that other bands currently don’t, but at that time we didn’t even think that we would get to a third one so soon. We are proud of our material and work so far and are glad that people like it so much.

Can you include us in your future plans? What can we expect from Moonlight Sorcery in the coming months?
We are having some discussions and deals on the works to get the album to new markets but not anything to announce yet. And of course we are working on our full length album as well and it will most likely see a release during the year 2023. We feel like most of the material has their base composed so far but will still need some work before we can fully start their recording. We want to make sure that the material sounds like it is supposed to be together and played in a certain order, not anything like a concept album but the general feel and the progression has to work. We also may have some sort of a secret unveiled in the next few months but more about that when it is relevant.

Thank you for your time and for answering my questions. I’d like to leave the last words to you…
Huge thanks to everyone who has supported us so far. If it is buying the album and our merch or just streaming the music and talking about us, we really do appreciate it and hope that we can also deliver quality in the future too.