The Great Mack was quite clear with his opening statement in his review; “a title like “Laments from The Dripstone Cave”…this alone should draw you in like a pack of flies to a corpse.”. Intolerance play their Death Metal the way it should be played…only death and decay and foulness in their purest forms. Let’s check how things are going in Spain… (Ricardo)

Hi there! Well, all started in the summer of 2015. All of us are friends since long time ago. We were at a normal bar drinking beers and talking about what things were going on about our respective bands at that time. Our drummer was really tired and pissed off with his band because the other members started losing interest in metal and decided to split up the band. The singer and the guitar player were also in another band but they were tired as well of that project and the bass player was not playing in any band back then. Then the idea was clear: we wanted to start a new project all together under the name of Intolerance (the name was chosen pretty fast since our drummer had it in mind since long time ago).

As we said before, we came from different bands and we wanted to form a decent band with the same idea in common. At first we were inspired by bands like Asphyx, Obituary or even early Kreator, but as time goes passing our inspirations and our way of playing has changed, so our clear influences nowadays could be bands like Morgoth, Convulse, Unleashed or Bolt Thrower.

We came from Speed/Thrash metal bands and we wanted to play more intense/obscure/whatever you wanna call it kind of music.

You’ve released a demo back in 2016. Shall we go back in time and discuss “Abstract Deliverance of a Twisted Mentality”, which you self-released on cassette?
Well, we think nowadays the demo has nothing in commin with how the band sounds in 2021! haha  That demo was recorded by ourselves like 5-6 months after we formed the band and started rehearsing, so the songs are really simple and was just that, a demo to show our first steps. We don´t play any of the songs of that demo, just “Crypt of Sorrow” since we think it´s a great song and still enjoy playing live.

About the production and the artwork: Definitely no. We´re not satisfied with that but as we said, it was just a presentation as a band. Maybe it was made pretty fast but well, we were just a bunch of stupid teenagers who wanted to play some kind of Death Metal and get drunk! It was released in tape format limited to 200 copies and we sold like 130or something like that, so we still having copies if anyone is interested! 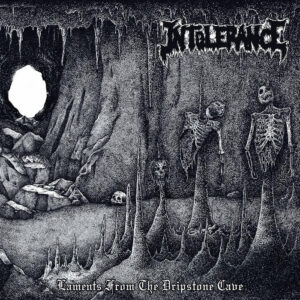 And last year you have released your latest release, the EP “Laments from the Dripstone Cave” (CD & Cassette released by Life After Death)…can you tell our readers all about it?
First of all: The band was on hold since 2017 till 2020. About the writing process: most of the songs of the EP were composed before we quit the band in 2017 and when we re-started the band in 2020, we re-work on this songs to make them sound better. The only “new” song from the beginning to the end of the EP was “Lamentations”. The EP was recorded in our home town, Zaragoza, at Sin/Con pasiones studio (an old studio were most of the 90´s bands from Zaragoza recoreded their demos and albums as Orlac, Anatema or Maelstrom to name a few) and was produced it by Mark, a cool guy who likes death metal as well and knows how we wanna sound! So the recording process was pretty comfortable and fast. We spent like 3 days in the studio, it goes pretty fast since we spent a lot of time in our rehearsal cave working the songs before we entered the studio. We are happy with the artwork, the production and the reactions. It seems people like the new EP and it´s being sold great.

What do you consider as the musical difference between your latest release “Laments from the Dripstone Cave” and its predecessor; “Abstract Deliverance of a Twisted Mentality“?
Like day and night: they has nothing in common. The compositive process, the way we play, the sound, the influences… all has changed from the demo-days. 4 years have passed between the demo and the EP. We think the band is more mature and have a stronger personality than before.

How did you get in contact with your label Life after Death?
We sent mails to a lot of labels all around the world and LAD was one of the first ones to write us back being interested in release our new stuff. We are happy with the final result and with Eric´s work spreading the stuff, but sadly we won´t release future stuff with his label since we had too many troubles with Spanish customs to receive the copies since the label is based in USA and it´s not part of the European Union. That sucks because he´s a cool guy, but we prefer to deal with European labels next time. It will be easier for us!

And what about the near future of Intolerance…?
Our future plans are to record our first full length this year, most of the songs are already composed and the 80% of the LP is done! The songs are in the vein of “Lamentations”. We think it will be better than the EP and sure the people who liked the EP will enjoy the LP too! It´s more mature and the songs are longer than the ones in “Laments from the Dripstone Cave”.

And now the questions for you as a music fan, let’s start with your playlist…
Interesting question: some of the new albums we are listening to a lot could be to name a few:  Benediction – Scriptures, Necrot – Mortal, LIK – Misanthropic Breed or Necrophobic-Dawn of the damned. About bands from Spain which could deserve  a special mention to us: Oniricous, Banished from inferno, Cruz, Hell-Division or Insulters.

A rediscovery or an overlooked gem that deserves attention?
An overlooked gem? hmmmm…. maybe the Spanish Unhallowed-Something in my inside demo from 1994!

Some of you are involved with acts like Duumviratus & Chagrin to name a few. Any news on them to tell our readers?
About Duumviratus and Chagrin there aren´t any news at the moment, are just projects so they are on hold at the moment. 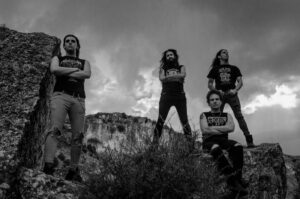 Are you guys involved in any other way in the music scene?
Some of the members of Intolerance are involucrated in a Spanish zine called PANDEMIA since 2020, maybe we will make more numbers in the future but it´s not a metal zine. We enjoy different kinds of music apart Metal. Our guitar player also has a new project called: Vortex to the void. Our drummer also had a metal radio show some years ago called Herencia Letal, so we were involved in different aspect of music through the years.

Before we wrap up this interview, do you have any final words or thoughts? Is there something I’ve forgotten to ask you which you would like to mention? Thanks for your time!
Thanks a lot to you for your interview and your support. You can follow us through or social media (Facebook, Instagram or Bandcamp as @intolerancedeathmetal). If you are interested in grabbing a copy of our demo or EP, just sent an email to: intolerancedeathmetal@hotmail.com