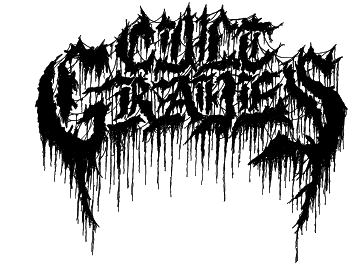 Cult Graves from the USA released their first EP “Strange Customs” last year, first as a cassette on Transylvanian Tapes and it got a CD treatment by Godz ov War Productions this year. Tori was quite clear with her review as she stated: “Drawing in inspiration from Black Metal acts such as Spain’s Proclamation & Canada’s Blasphemy, they also hone in elements from the Florida Death Metal scene from Possessed, Morbid Angel and ESPECIALLY Deicide“. So we got in contact with A.C. to fire a couple of questions at him… (Ricardo)

I wanted to start a band that was fast & heavy with the evilness and brutality Cannibal Corpse & Deicide. I got the idea for the name from watching documentaries about the Jonestown massacre and started to think about the wars carried out in the name of god leaving mass graves everywhere which lead me to the name Cult Graves. I am personally inspired by Cannibal Corpse, Deicide, 1349, Regurgitate, old Sepultura, Ripping Corpse etc and AB is into Razor, Celtic Frost, Black Sabbath, the Misfits and Repulsion. We both had an interest in playing fast, evil & brutal metal to the extreme.

In late 2017 I posted an ad seeking musicians to start a band in the vein of old CANNIBAL, DEICIDE, 1349 & HELLHAMMER, which particularly caught the attention of drummer AB who replied to arrange for a jam. After 1-2 jams, AB invited me to check out his last show with the band he was in at the time and from there we started working on some song ideas. Shortly after, we met our now former bassist/singer and even tried out a second guitarist but ultimately decide to stick to a three piece lineup.

Before we talk about your latest EP, lets go back to 2018…the year of your first and only demo…
The songs from our Demo ’18 were fairly straight-forward but with a more polished production. We had worked out most of the songs by the time our previous bass player joined and we practiced for almost a year as a three piece before we went into the studio and recorded Demo ’18 then played our first gig. We were content with how the demo came out. A.B. sometimes still can’t believe he is on the drums. Overall, the demo got a good reaction that helped to establish the band. 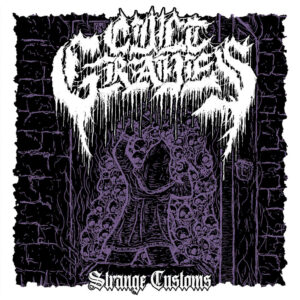 And now “Strange Customs”….the floor is yours!
After relentlessly playing gigs for about a year which included a short California tour with CYSTIC, our bass player departed and we started working on our new release as a two piece lineup. We wrote Abomination Rites first and continued to come up with new material at an average of about one song per month. During this time, the national pandemic lockdown went into full effect while mass protest & state wild fires raged out of control. It got so bad that we even had to reschedule our original date for recording because the freeways were shutdown due to intense smoke & fire preventing our sound engineer from being able to make the commute. It seems people are really getting into this release especially fans of barbaric death metal. The art was inspired by the great Steve Ditko and actualized by our friend from DIPYGUS, Dayan Weller. We got in contact with Transylvanian Recordings through James, whom we met while attending local gigs. He was interested in working with us since our initial demo release so we followed up when it came time to do Strange Customs. Godz ov War then reached out to us to release Strange Customs on a CD with Demo 18′ as bonus tracks.

The lyrics are a collaboration where we contribute parts that fit the song & theme. On Demo ’18 the inspiration was schizophrenia and murder while Strange Customs was more focused on demonic rituals gone awry! Our music is primarily horror accounts inspired by physical & spiritual aspects of death/dying and generally anything else negative or fucked-up such as insanity, crime, drug abuse, murder, disease, punishment, poverty & captivity.

Any news to tell about the near future of Cult Graves?
We plan to continue working on heavy & brutal material for a future release, look for a bass player, play gigs, tour and record. The new songs will be an advancement of our style but you will have to hear it for yourself to get the full impression. We have spoke with some labels about the next release but we are keeping it under wraps for now

As said, “Strange Customs” was first released on cassette, you have a thing for the good old format, right?
Cassettes are a cheap, convenient way to collect & trade music. They also retain a certain cult appeal that requires a level of dedication & commitment, which is perfect for underground death metal. We would be thrilled to have the opportunity to do a vinyl release. Both formats are very valuable to us as musicians but CD personally holds more importance because I’ve been collecting them from a young age.

Besides Cult Graves, do you guys have any other projects or bands? Or planning to have a project or band one way or another? And are you involved in any other way in the music scene?
No bands at the moment besides Cult Graves but once the pandemic lockdown is lifted, we will explore possibilities for a side project. We have participated in booking local shows & hope to resume in the near future. 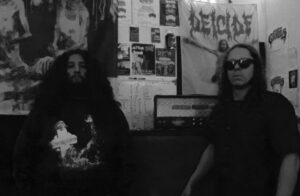 What was on your recent playlist? Also any shout-outs on bands the readers have to check out?
Some of the albums we have been into lately include:
EXHUMED – Platters of Splatter
PHARMACIST – Medical Renditions of Grinding Decomposition
DEEDS OF FLESH – Gradually Melted & Trading Pieces
KILLING ADDICTION – Omega Factor
S.M.D – Hatefed Motherfucker 666
FALSE CONFESSION – Basement Demo 1983
SOCIAL UNREST – Rat in A Maze + Not So Quiet On The Western Front comp
Crytoposy – Blasphemy Made Flesh
Cannibal Corpse – The Bleeding
Inside out – No Spiritual Surrender
Autopsy – Mental Funeral
Sororicide – The Entity

Before we wrap up this interview, is there something I’ve forgotten to ask you which you would like to mention? Thanks for your time!
We would like to thank Transylvanian Recordings and Godz Ov War Productions for putting out our release we are eternally grateful, and thank you to everyone that has boughten the release from the labels or has bought the release or a shirt from us.