With “Decrepit Flesh Relic” Civerous delivered a debut full-length with “Seven iniquitous canticles over forty five minutes of emphysematous crepuscule semblance”, according to Tori Belle’s review. “Remarkable debut full length constructed that deserves all the praise!” was her conclusion so I decided to contact the bunch from Los Angeles for sending a couple of questions their way. Daniel (guitars) was so kind to answer them all… (Ricardo)

So previously Lord Foul and I (Daniel) have an atmospheric black metal band that we played in together for sometime and one day we were standing in front of the home he was living in at the time and he brought up the idea of starting a death metal band and we both just figured “why not?” so we just went from there. When it comes to the concept of the band Lord Foul handles the art, lyrical direction, and the main thing he didn’t want to focus on were the common themes within the genre. While the rest of us just handled creating the music that would best suit those themes.

What inspired you to start a band in this style? What about the genre intrigues you?
Honestly from the day that the idea of just starting the band was brought up we thought to ourselves “why didn’t we do this sooner?” since we’ve been big fans of the genre since we were teenagers haha. I would say personally what appeals to me now are the more darker tones/atmosphere that can be created, and with that the overall brutality within the genre goes hand in hand with that. The bands that definitely influenced us are diSEMBOWELMENT, Evoken, Inverloch, Krypts, Spectral Voice.

Before we start on your own music, in your opinion which historical release or releases absolutely defines the genre you’re playing?
Well since we’re more influenced by the death doom genre definitely diSEMBOWELMENT’s – Transcendence Into The Peripheral. Along with the Peaceville Three like Paradise Lost, My Dying Bride, and Anathema. 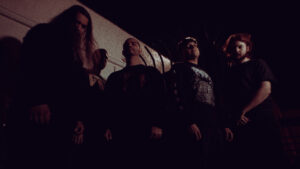 Moving on to your own musical achievements, your demos “Raw Demo I” & “Demo MMXIX” (cassette released by Corpse Torture Records & GreySun Records)…
Honestly we are proud of what we created, but we were still trying to figure out what kind of direction we wanted to go in musically. If you listen to the material from the demo compared to what we do now it’s definitely night and day in comparison. When it came to the writing process it was just us taking influences from different areas whether it be the bands from Sweden, Finland, or even the US. The recording process was definitely different because it was the first time as a band we did it live instead of following a metronome. I’m honestly satisfied with what we put out because we all have to start somewhere, but we don’t plan on ever performing this material live again. As for the artwork I still love it! When it came to releasing the demo I felt it got good reception because shortly after releasing it we did a run of shows to put us out there and I felt it definitely helped us.

You’ve also released a split with Stygian Obsession “Heralds of Affliction” (cassette released by Pacific Threnodies)…
This was when we wanted to heads towards the death/doom genre. When it came to the writing process it honestly felt like the songs just pieced themselves together very naturally and shortly after writing the material for the split we recorded it which went pretty quickly as well. I feel like we’re still satisfied with the music because it pushed us to write the material for Decrepit Flesh Relic. We still love the artwork that was made for the split as well, and when it came to the reactions I felt like it had better reception compared to the demo.

And what about the compilation “The Expedition of Illness” (cassette & CD released by Sewer Rot Records & Black Hole Productions)…
For the compilation it was just an easier way for people to get a hold of the demo and split material because the copies of the individual releases were already gone by that time so for anyone that missed out or for newer fans they would be able to have access to that. The only thing that was different was really the artwork and we felt that it was best suited for the compilation. When it came to the reception for the compilation I felt like it did pretty well because it just helped with anyone that missed out on the older material or for any new fans that discovered our music during that time. 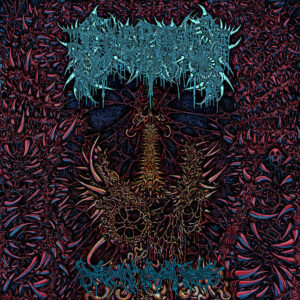 We have covered all your releases…except your latest one, your debut full-length “Decrepit Flesh Relic” (CD & Cassette released by Transylvanian Recordings)…
So when it came to the writing process it was long which I felt worked to our advantage because we started writing during the pandemic and really spent time putting a lot of effort into piecing the music together. By the time we were done with writing the material and started recording it there were some delays we ran into, but when everything was said and done we were very happy with the final product because of the emotional time and energy that was put into it. When it comes to the artwork we’ve been using the same artist for awhile now and he really is amazing at capturing the overall picture of what we’re going for and his name is Nick Mueller. Pretty much the back story of creating this album there was a lot of emotional energy that was put into this because some of us had lost some family members during that time so it was an outlet for us, and having the pandemic going on as well didn’t help either. Definitely a weird time for all of us.

What do you consider as the musical difference between your latest release “Decrepit Flesh Relic” and the demos?
It’s just the overall style. The demo material was more just traditional death metal while the material for Decrepit Flesh Relic is more death/doom with some blackened influences as well.

Switching from Daniel to vocalist Lord Foul about the lyrics, can you tell us more about it?
The concept behind the lyrics are many different things. In the earlier material they were focused more on disease and sickness, but in the later, more recent material the lyrics are focused more on Meso American  folklore mixed with occult fantasy and mysticism. No books or movies that I can think of have inspired me. I think I’m inspired more by actual historical  events and places and definitely the occult

And back to Daniel again; within your discography you have the format cassette. Is that important to you? Would you like to have something on vinyl as well? What do both formats mean to you, as a recording artist but also as a collector?
For me personally I’m not much of a cassette person, but I know that format is very crucial to the more extreme genres of metal and I know there are actually people who prefer tapes over other formats. As for vinyl it is our goal to get our music onto that format as well because I’m an avid record collector!

How did you get in contact with your label Transylvanian Recordings? Will they release your new material as well?
If I recall correctly I think Lord Foul reached out to James and it just kind went from there and he’s treated us so great and has helped us way more than he knows and we are forever grateful for him. As of now we are part of the roster for 20 Buck Spin so our next release will be through them.

What are your expectations for Civerous in the future?
We just hope that we will be given opportunities to travel and play shows in different areas and keep writing music and hopefully our fans will enjoy it. So far we are working on some songs and have some ideas about what we want to do. Just need some more time with it. It’s too soon to tell how the sound will differ once we have all the songs flushed out we’ll be able to hear how much more different the music is compared to our previous.

Some of you are involved with acts like Ancient Tome, Crematory Stench & Tezcatlipoca to name a few. Any news on them to tell our readers?
When it comes to Ancient Tome Drew has enough material for an EP but just needs to record it and he’s currently working on another project called Proper Death. As for Crematory Stench Matt is no longer in the band with us, but I know that the band is still active! As for Tezcatlipoca that’s a project that Lord Foul gets credited for even though he has no involvement with that band. It’s a common mistake that gets thrown around a lot for some reason. As for now Lord Foul and I don’t have any plans for new material for our other band Aylwin, but I know he’s currently working on new material for his bands Avoidant and Enigmazhud. I’m actually working on a funeral doom project myself called Precipice and hope to have the recordings completed before the year ends. So as you can tell we’re very involved with all our projects. 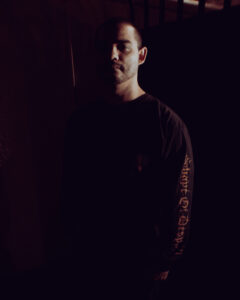 Are there any bands or albums of your recent playlist you would like to mention?
The band Vukari, I’m fortunate to be friends with the drummer Mike and that band’s material is absolutely incredible! I highly recommend checking them out if you haven’t.

Also do you have favourite labels you always keep an eye on when they announce a new release? Or favourite zines, illustrators etc.?
Honestly I don’t have a favorite label, whenever I see or hear announcements for new releases or reissues I’ll check them out if it catches my interest because I’m always digging for more music to discover. I always look forward to seeing more art my friend Nick Mueller is working on as well as other artists as well like Paolo Girardi who is absolutely phenomenal at what he does. I’m not too familiar with the zones are out there so your zine would honestly be the first one I would mention now and I’m thankful that you wanted to interview us!

Before we wrap up this interview…is there something I’ve forgotten to ask you which you would like to mention? Thanks for your time!
Just thank you for letting us have this opportunity to speak with you. I hope I was able to provide enough for you guys! We will be doing our run of shows in July and will be playing Total Death Over Mexico and we’re really looking forward to that! Thank you again!