Blasted Heath – “Humanity exudes a lot of self importance but we’re less than ants or even bacteria in the grand scheme of things.” 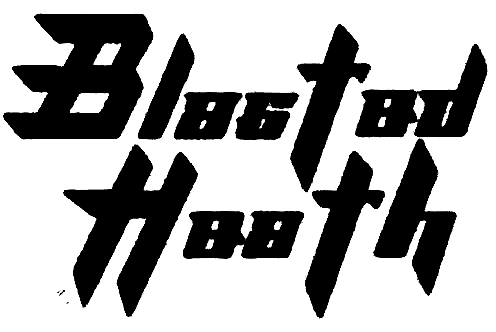 One of my outright album of the year contenders is ‘Vela’ by Indianapolis Black/Thrash band Blasted Heath. I spoke with guitarist/vocalist Kyle Schumaker about why we should always have one eye on the sky! (Marksson)

Greetings to you from the UK. Thanks for taking some time out to answer my questions. How is life State-side right now?
Things are good! There’s a general sense of anxiety I have living in the United States at any given moment, but I’m chilling with the dog on my porch right now drinking coffee and the weather is unusually nice today in Indiana, so I’m content.

You have unleashed your debut album, entitled simply ‘Vela’. Why did you choose the name ‘Vela’?
Vela is the name of a pulsar wind nebula, it was a picture I found online when I was looking for more information on neutron stars. I think I was drawn to the image because it had a passing resemblance to a human head. I don’t exactly remember who thought of what but our drummer Conrad may have already been playing around with an image of an astronaut with a cracked space helmet. I think the concepts kind of got combined for the album cover, with the nebula incorporated into the “space ape” image that Conrad did a magnificent job bringing together. 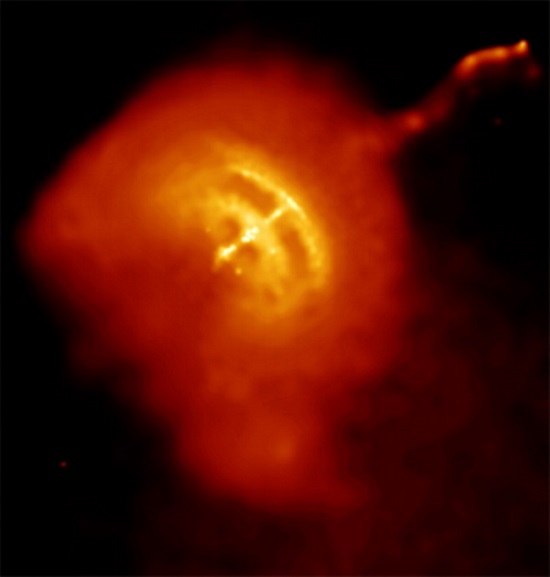 The album itself appears to me to be one concept, focusing on outer space and the fears and paranoias created by the great unknown. How close to the mark am I? Can you shed more light onto the theme of the album?
Yes you pretty much nailed it. I spend a lot of time watching YouTube videos about space these days and trying to wrap your mind around the scale of the universe is extremely humbling. Humanity exudes a lot of self importance but we’re less than ants or even bacteria in the grand scheme of things. Trying to ponder this and also the finite nature of things can feel scary and overwhelming, so it became a natural thing to try and write about.

You released the album through Wise Blood Records. How did this collaboration come about?
The curious luck of timing! Sean Frasier started Wise Blood Records during the pandemic around the same time we started Blasted Heath. He’d already established it a bit around the time we got a break playing our first show opening for Nunslaughter at Black Circle in Indianapolis. A few friends who caught the show talked us up to him and he reached out. The album was already in progress at this point and he liked what he heard. We were initially just planning to release everything independently, but really liked the idea of a home grown label in Indiana just starting out, and getting to be a part of that. It was a great opportunity for us and we think Sean is definitely going places with his label.

Is the outer space concept something that will continue into your next release, becoming in a way the bands identity? Or will the next release have a fresh perspective?
That’s a good question. The lyrical content and sound kind of developed simultaneously and organically, where as now the theme feels intertwined with the music a bit! Initially the idea was more like punk Bathory, but some of the post-metal vibes of previous projects found their way in and even dominated in places. I’m wary of the “space” thing becoming a gimmick, but I think at this point there is more to explore with it. I like to think about big picture stuff and I’m very into science content, so it could take the shape of human evolution or technological apocalypse, not strictly outer space but likely within that science fiction/reality ballpark. 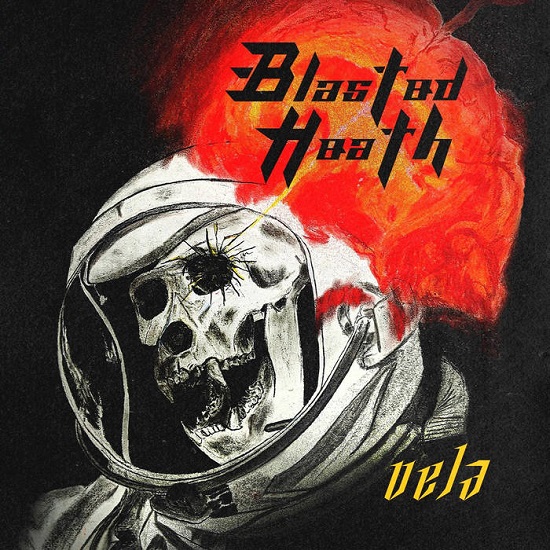 How hard was it blending hard hitting Black/Thrash with the more progressive/space/ rock elements? Was there a grand plan for the bands sound or did it blossom organically?
So we had a previous band, Crown Hill Vulture which was more post-metal sounding. It wasn’t explicitly the intention but I think some of that definitely carried over into this project. Our guitar player Billy also has a ridiculous pedal board, so tonally his options are like endless and it would be a waste not to take advantage of that. The most simple version of the concept for Blasted Heath was just something like early Bathory, where it almost has this punk Discharge sort of feel. So the black metal vibe is meant to be distinctly first wave and infused with a punk attitude. I started in with the space lyrics and I think the sound just sort of evolved naturally from there, with us putting more emphasis on the psychedelic elements as the writing went on.

What kind of feedback, fan/critic, has the album received so far? Any comments that particularly stand out?
It seems like people really dig the infusion of psychedelic elements, so that’s cool! Especially since it wasn’t exactly what we set out to do but just sort of happened. I think one reviewer did not care for the production, haha. It was recorded in my basement as stated on the album. I think if you’re trying to capture the feeling of first wave black metal you can’t come in sounding all pristine, that just fucks it up. We went for raw and most of the album was recorded live in the room (drums and guitars live, bass and vocals dubbed in) Billy was our producer and has a background in punk and hardcore, and so we wanted that approach. We then took it to a studio and ran it to reel to reel tape, which gives the sound a quality that I really love. It’s rough around the edges and there’s a chaotic feel to the performance I think that comes from recording it live. I think it sounds like people actually playing music in a room, and that’s not how most albums are recorded these days,
which is a pity. 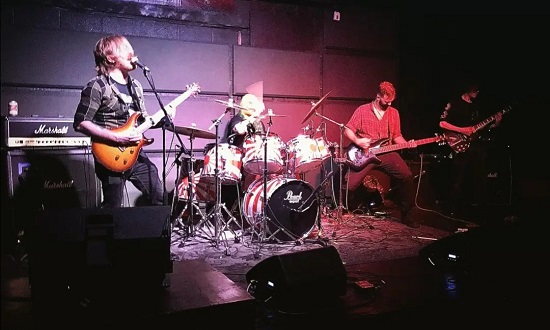 What are the origins of the bands name, Blasted Heath?
You got me! It’s from H.P. Lovecraft’s The Colour Out of Space. Obviously the themes of existential dread seemed fitting. I’m sure people would probably consider living in Indiana something like living in a “Blasted Heath” so we’re embracing that.

Do you have any special rituals or stage sets to help re-create your concepts on stage? What can people expect from a Blasted Heath live performance?
I do videography for a living, so I decided to start experimenting with some video projection at our shows. It’s in the infancy stage at the moment, and I’m not really a projectionist, but I think it’s coming along. We’ve been using images of Saturn from the Cassini probe and projecting them onto the stage and onto the band. Just working on giving our live show more of a vibe, which otherwise is a pretty no frills affair (we aren’t doing any costumes or makeup, haha, it’s a t-shirt and jeans deal)

Do you keep an eye on your local scene at all? What bands or labels for the Indianapolis area should we be listening to?
Well I’ve looked up to the guys from Demiricous forever and they represent the scene here in Indianapolis extremely well. I even worked with some of those dudes at the same local pizza restaurant. Dustin their drummer is the main show promoter as well and gave us our break opening that Nunslaughter show, for which we are grateful. I would say also that Obscene is a death metal band on the come up and you should watch out for any band on that Wise Blood Records roster, which are not strictly all Indiana based but Sean does a great job repping the scene here. Mother of Graves for example has an album about to come out you should look out for if you like that gothic death doom sound like Katatonia. In fact I think Dan Swano mastered all of our albums this year haha!? We love Dan Swano here in Indiana.

That’s all I have for you. I’ll let you end the interview by telling us what comes next for Blasted Heath. Thanks again for answering my questions.
We have had some very productive jam sessions here recently and are about to get serious about doing some writing for the next album. Hopefully we get a chance to play some out of state shows or even do something like a little mini tour next year but we’ll have to see how that all shakes out! Thanks for checking it out much love to you all in the UK!
Best Regards,
Kyle