Arallu are stalwarts of the Israeli metal scene releasing 6 albums in the past 2 decades. Earlier this month, the band reissued their 4th album ‘Desert Battles’ ahead of its tenth anniversary. The black/death metal sound is boosted by re recorded vocals, remastering and a new cover art. I spoke to front man Butchered about the Desert Battles reissue, keeping the band going for over 2 decades and more. (Peter ‘Trendcrusher’ K.)

It’s been 10 years since the release of  “Desert Battles”. Why did you decide to release a remastered version of the album with re recorded vocals and new cover art?
Hello from Jerusalem and thank you very much for this interview. Im Butchered the main member of Arallu. “DESERT BATTLES” album finally coming again after long time of waiting. The original album released March 2009 but we never was Satisfied with the results of the final mix and mastering , and that’s why we didn’t release it again after the 2000 copies as finished in 2013. Lately people who have all Arallu discography except this album asks us about this album and we think it’s time to release it again but not as the original version. Dory Bar or who responsible for “GENIEWAR” and “SIX” albums re mixed it and mastered the album after we recording the full vocals again to get the best from this record.

Your sound is described as Oriental metal. How did you come up with your unique sound?
When I started listen to the European black metal bands of the 90’s ,I really liked the idea of the local folk music inside the raw sound of the black metal. I thought to myself “I can’t play like that . I can’t write music like that. I can feel the cold and the mountains coming out from the speakers! if I will try to sound like that no one will listen to my music. I can’t make it sound like that. BUT if I will bring a special sound and guitar riffs with special instruments combined with them”. middle eastern music is my childhood home music. My father was listening to this music since I was a child. the combination between the european sound and the middle eastern sound id not easy to do and we works hard to combine them but after many years u can see its works together.

The new version of ‘Desert Battles’ sounds great. How does it feel looking back at the album?
Thank you very much and i’m happy you like it like us. I think if the original version of this album was sound like that, more people were discovering our music. For my opinion this album is the best of Arallu, and we think a lot around the years  to rec. this album again. But thanks to Dory Bar or the new version sounds like we really rec. it again. 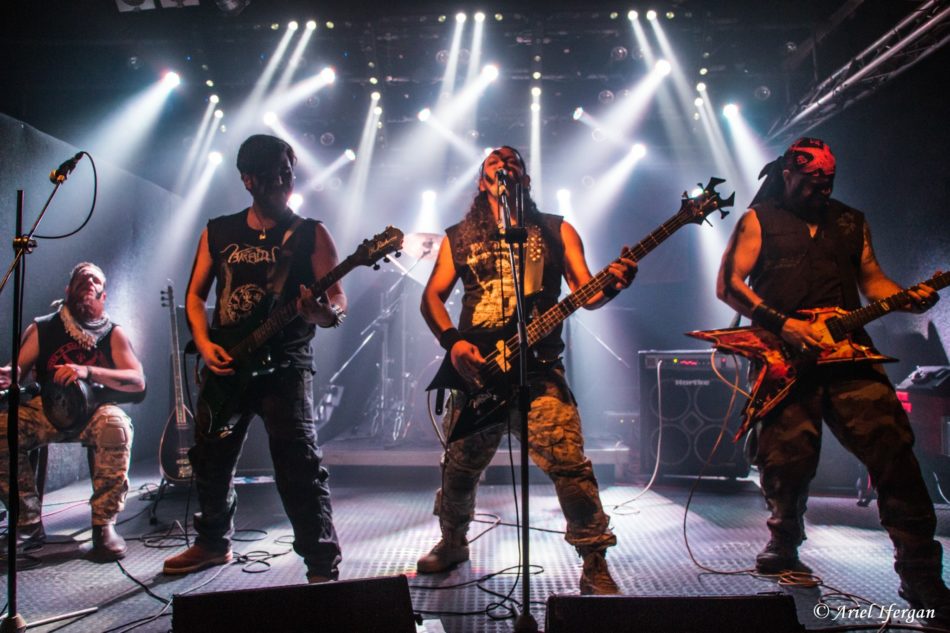 You have recently released a video for the track “Possessed by the Sleep”. What are your thoughts on music videos in the age of Youtube?
“Possessed by sleep” is from our last album “SIX”. i think every song of every album should release as a video because Video can  explain  the lyrics of the song in the best way. But its all about money , and videos are to expensive and that’s why we don’t have every song a video clip…

What are your thoughts on the current state of black metal?
Mmmmmm… I think there are some good bands and albums and some not good albums. I can tell you I really like to listen for some new music from EMPEROR. The last album of MAYHEM is really great, same of SATYRICON and ROTTING CHRIST, but i’m really disappointed from DIMMU BORGIR and CRADLE OF FILTH for example.

You are the original member of the band. What has kept you going for the past 20 years despite the changes in lineup?
I really like to create music, the feedback from album to album get better and it gives me the force to move on. The band members are changed because i’m not stopping to push the band forward and some people are get tired from that. I can tell you this line up of the band have a great force. like the devil himself and i’m sure they will go with me for many years!

What’s  currently on your playlist?
We working now for our upcoming album. Its will be album number 7. We finished already 8 full songs and we hope to start rec. soon. Beside that I hope to perform soon in asia. It’s a dream for me to come and play India,Japan, Singapore. I hope someone will take it forward someday…

Do you have any more shows/tours planned for the rest of the year?
Unfortunately nothing for now….

Thanks for answering all our questions. Do you have any final words?
Thank you very much for this great interview and i’m really hoping to come play for our fans in your great country soon.